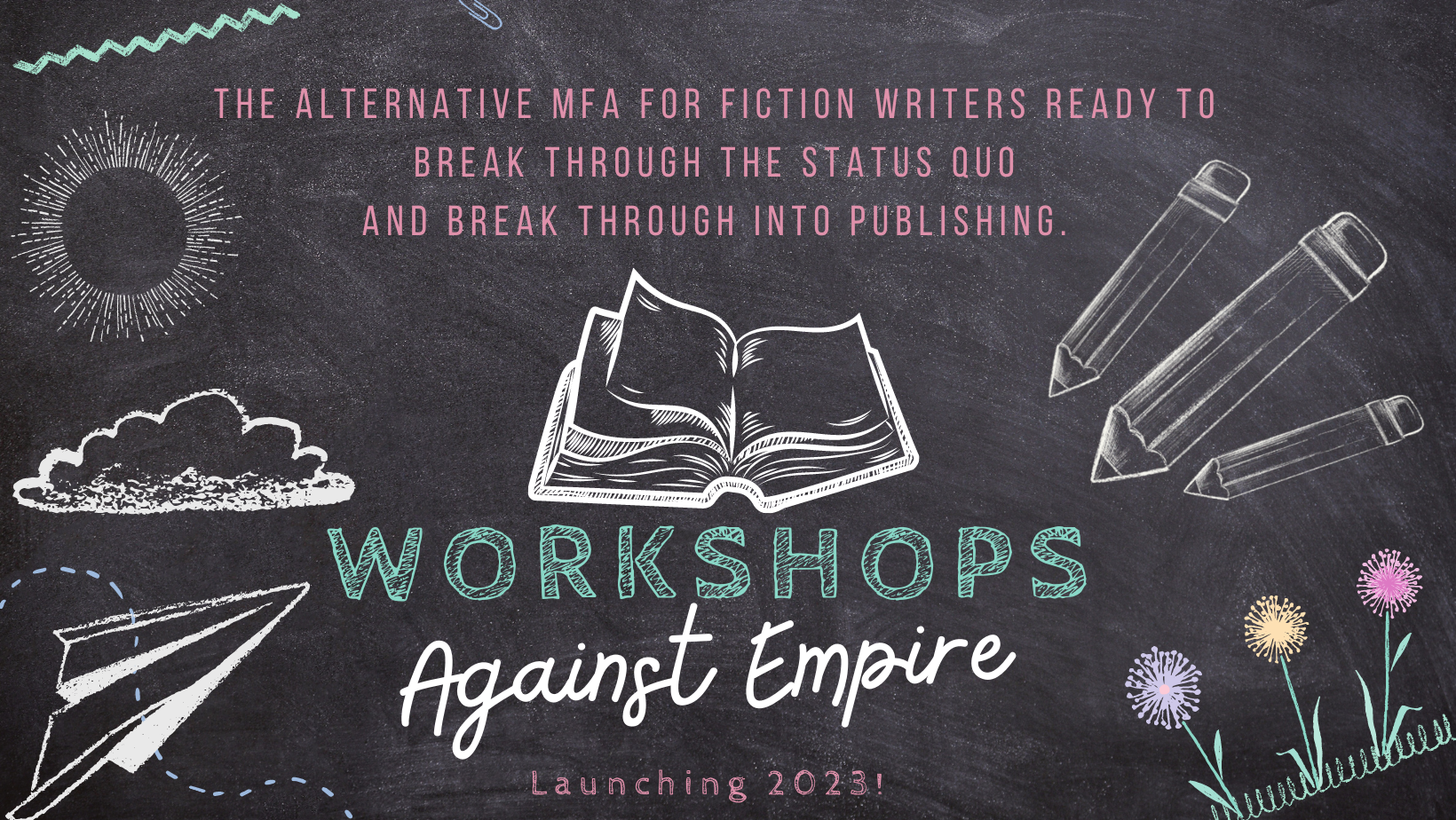 Committed to your craft?

Ready to break through into publishing?

This is the alternative MFA you've been waiting for!

Workshops Against Empire, launching in 2023, is a year-long program for writers working on socially engaged fiction--fiction that addresses issues of social justice and the impact of culture and politics on human relationships.

This program is designed for authors with a complete draft of a novel, and is designed to take you through one complete revision over the course of one revolutionary year--with the full support of a seasoned book coach, a host of special guest authors, a workshop full of like-minded peers, and a team of agents and editors actively seeking working like yours.

takes it name from Eric Bennett's book Workshops of Empire: Stegner, Engle, and American Creative Writing during the Cold War.

In it, Bennett explains exactly why it is that so many of us with traditional MFAs have felt shut down when we tried to bring socially engaged work to class: the American MFA program was developed as a tool of "soft power" against the overtly political propaganda of the USSR, and it was designed to promote an aesthetic that eschewed political concerns in favor of a tight focus on the individual.

Sounds a bit outdated, doesn't it?

The problems we face as a culture have never been greater. And so-called apolitical fiction (because all fiction is political, whether consciously so or not) won't help us address them.

But neither will stories that come across as preachy or didactic.

This program is for you if:

How is the program structured?

Workshops Against Empire starts with a generative writing retreat in Santa Fe, New Mexico, designed to provide artistic inspiration and camaraderie while helping you more firmly embrace your own personal aesthetics.

After this retreat, participants will work closely with me as a book coach as we work through the coursework in four core online courses.

These courses cover how we can use the tools of fiction in ways that reflect our ideals, the core principles of long-form fiction, how to craft powerful scenes, and how to write “professional-strength prose." They're designed to provide a comprehensive education in the art and craft of long-form fiction.

After you've completed these core classes with me over the first four months of the program, you'll enter into a bi-weekly online workshop with me and the other members of your cohort.

This workshop is designed to take you through a complete revision of your novel manuscript over the course of the next 8 months, and will incorporate best practices for equitable, empowering, and effective writing workshops based on the work of Matthew Sallesses (Craft in the Real World: Rethinking Fiction Writing and Workshopping) and Felicia Rose Chavez (The Antiracist Writing Workshop: How to Decolonize the Creative Classroom).

During this period, the program will feature one craft talk per month from a widely recognized author of socially engaged fiction.

This year-long program will conclude with a business-oriented retreat in Portland, Oregon, in which all graduates will have the opportunity to develop their query materials with the help of a professional and go on to pitch interested agents and editors on their novel.

Unlike a traditional MFA…

Workshops Against Empire doesn't just provide education on fiction in general, and opportunity to work with published authors. It provides highly personalized experience designed to give you a complete education in the art of the novel (NOT the short story) AND a complete, publishable draft of your novel, all in the course of a single year.

Unlike a traditional MFA, Workshops Against Empire won't burn you with ignorant feedback, racial bias, or sexist power trips.

Unlike a traditional MFA, Workshops Against Empire provides education on the publishing industry, and support in pitching your work.

Workshops Against Empire is designed both to give you a complete education in the art of fiction AND get you over the finish line with in publishing your first novel--while providing you with a community of like-minded writers who can support you long after the program ends.

In other words, the idea is to actually catalyze a transformation, from aspiring novelist to debut author—because when it comes to those writing socially engaged fiction, it’s that transformation that’s going to change the world.

It’s this intention, to help those I work with actually achieve that transformation they’re looking for, that’s guided me in developing this vision, along with my own personal mission to “tell stories that matter and help others to do the same.”

Enrollment in this program will be limited to intermediate writers working with socially engaged themes, who have a full draft of a novel. The application window will open in 2023.