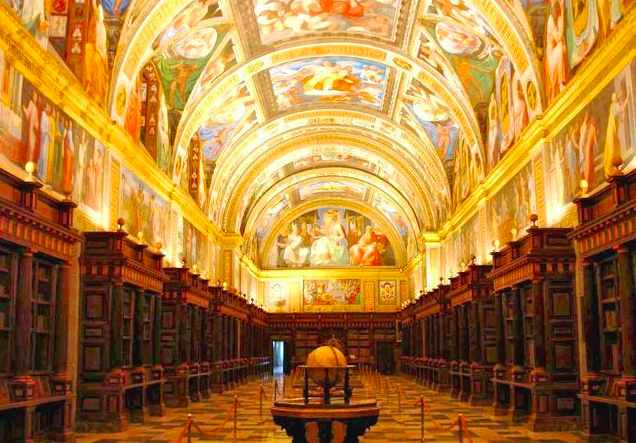 That’s the opening of my latest short story, “The Library of the Lost,” which was inspired by my recent trip to Spain, and to the library of ancient books housed in an ornate old monastery just outside Madrid. This library (pictured above) contains an astounding 42,000 handwritten books in various languages, representing all human knowledge (as known to the Western world) circa 1775.

Nearly all of these books are illuminated with artwork, much of it in eye-popping cobalt blue and gilt, though the writing itself is just as astounding. For anyone who loves calligraphy, and for anyone who loves book arts, it’s an unparalleled experience to walk among shelves full of hand-bound, tooled leather books, with their edge-gilted pages turned out on the stacks, to minimize atmospheric damage to their bindings–to see Latin, Arabic, Sanskrit, and ancient Greek (and Spanish, of course) rendered in calligraphy so exquisite it could only have been the product of a lifetime of study and practice.

Here you’ll find the Ottonian Golden Gospels of Henry III (1045–46), and the only known copy of the Kitab al-I’tibar, a 12th-century Syrian autobiography, among 2,700 manuscripts dating from the 5th through the 18th century (including an illuminated 11th-century commentary on the the Book of Revelations, penned in the eighth century by the Spanish monk and theologian Beatus of Liébana).

About the frescoes that grace the ceiling of the library pictured above, the website of the historic site has this to say:

The vault is occupied by personifications of the Liberal Arts and Sciences, painted di sotto in sù and surrounded by giants. In the lunettes are representations of individuals, from antiquity onwards, who had cultivated these disciplines. Scenes on the friezes refer to the trivium [Grammar, Rhetoric, Dialectics] and quadrivium [Arithmetic, Music, Geometry, Astronomy, together representing the seven subjects of the Liberal Arts].

My family’s roots extend into South America, and as a fan of the great Argentinian author Jorge Luis Borges, I could not help but think of his short story “The Library of Babel.” In this story, Borges–who, in addition to writing fiction, served as the director of the National Library in Buenos Aries–posits a library that is vast but not infinite, and which contains books that contain every possible arrangement of twenty-nine characters: the twenty-seven letters of the alphabet, the comma, and the period.

Here at El Escorial, I’d found a library meant to encompass all of human knowledge. And, as my husband pointed out, in the countryside just beyond El Escorial lay the Valle de Caldos, the Valley of the Fallen, which plays a part in Dan Brown’s novel Origin. I thought of my grandmother Priscilla (who was, incidentally, a big fan of The Da Vinci Code), and the family rumor that she’d copied out a banned book by hand when she was a young mother in Guyana. I thought of my cousin–who lives in Madrid, and who’d taken a group of us to see El Escorial–a software architect and Dungeons & Dragons fan, who happened to have a copy of Borges’s Ficciones in his own library at home.

I thought of languages, both natural and machine; I thought of James Gleick’s book Information: A History, a Theory, a Flood, which ties together, in one astounding knot, cryptography, computer programming, and DNA sequencing. I thought of my lifelong fascination with codes, and (if I’m willing to admit it) conspiracies.

I thought too of all the great libraries whose contents have been lost to us–chief among them, the library of the Maya at Chichen Itza, about which Wikipedia has this to say:

There were many books in existence at the time of the Spanish conquest of Yucatán in the 16th century; most were destroyed by the Catholic priests.[4] Many in Yucatán were ordered destroyed by Bishop Diego de Landa in July 1562.[5] In his conviction of the superiority and absolute truth of Christianity, De Landa wrote:

We found a large number of books in these characters and, as they contained nothing in which were not to be seen as superstition and lies of the devil, we burned them all, which…[the Mayans] regretted to an amazing degree, and which caused them much affliction.

To which, as an American, I have this to say: no shit, dude.

Put all of these wild ideas together in one writer’s head, and what do you get? My new short story, “The Library of the Lost.” =)