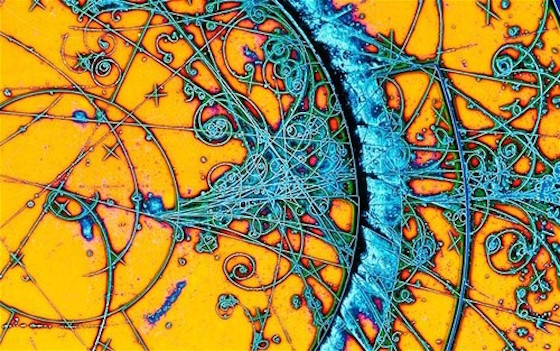 I wrote the first draft of this short story around 1999 and revised it innumerable times over the years. Though it got me into grad school, the story racked up at least twenty rejections and remained unpublished until 2013, when a young editor at Bayou Magazine named Robin Baudier told her superiors that she wouldn’t take on any other project until the magazine decided whether or not it was going to publish this piece. I’d found my first real fan!

It seems fitting that Robin’s love for “Spin” brought this story out, at last, into the light of day, because it’s a story about love, albeit romantic.

It’s also a story about physics, quantum entanglement (the real phenomenon at the heart of the fiction), and Einstein’s “spooky actions at a distance.” I’ve been thinking about such things recently in the wake of our latest major scientific breakthrough, the detection of gravitational waves via the Laser Interferometer Gravitational-Wave Observatory (LIGO) in Hanford, Washington, and Livingston, Louisiana, which appears to confirm one of the stranger implications of Einstein’s theory of special relativity.

In essence, that giant, immensely expensive piece of equipment was constructed solely for the purpose of detecting the subtle ripples in space time hypothetically generated by the collision of two black holes just over a billion years ago, many millions of galaxies from here–and, as of just a few months ago, it succeeded. Those ripples are hypothetical no more.

Nicola Twilley, writing for the New Yorker,  points out that virtually everything we know about the universe has come to us via the electromagnetic spectrum, whereas LIGO is a completely new kind of telescope, which means we have an entirely new kind of astronomy to explore. How exciting!

Clearly, I’m still preoccupied with many of the same things I was at twenty, when I wrote the first draft of this story. You’ll see other hallmarks of Young Writer Susan here as well…

Want the story, “Spin,” as well as the rest of The Story Behind the Story? Support an emerging author (that’s me!) for as little as $5/month.