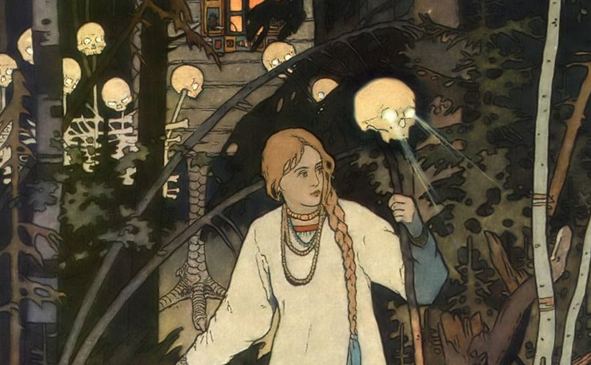 I.
Nevertheless, it is the one you’ll need.

To endure, as a girl.

II.
If you want Barbie, she’ll give you Raggedy Ann. If you want a Cabbage Patch, she’ll get you one made by the neighbor lady.

III.
The neighbor lady might be a witch, but probably not. She’s probably had all the broom beaten out of her by life, despite her skill in creating lifelike dolls out of cotton batting and panty hose.

IV.
Ever notice how motherless the heroines in fairytales are? Presumably, Mom died in childbirth, or perhaps of “female complaints,” because if she were around, she never would have allowed the girl to take her father’s place as the rich man’s captive in the castle, singing pots or not—and of course, Dad wouldn’t have had to marry that wicked stepmother.

V.
Wicked stepmothers get a bad rap, but really, can they help it? They’re wicked. It’s the heroines’ dads I wonder about. Sure, maybe your new lady is a little unstable—a hot mess, if you’re honest—but did you have to leave your kids in the woods that winter to starve, just because she told you to? Did you have to stand by while she made your daughter sleep in the cinders? And did you have to stay away so long on business when you knew full well that lady had it in for your girl?

VI.
That’s what Vasalisa’s dad did, and this wicked stepmother of hers, who apparently considered Vasalisa too big to starve if left to her own devices in the woods that winter, gave her an impossible task instead: to go to the witch’s house in the forest and return with coals for the stove. And this was the dwelling place of no minor hedge witch, mind you, no marketplace purveyor of crystal-infused prayer candles or essential oils for personal power or Norse runes stamped on polished rocks for purposes of divination—this house belonged to the queen bitch of Russian witches, Baba Yaga, which rested on four stout chicken legs, with a white picket fence of human femurs, topped by human skulls. And as soon as Vasalisa knocked to make this neighborly inquiry on behalf of her household, she was swept inside. (One can only assume the witch cackled, as witches are wont to, and chickens are too.)

VII.
Did the witch lop our girl’s head off and cut her up into chunks for the stew pot, reserving her femurs and skull for later use in landscaping? Of course not. Because in this story, all the major players are female, and the violence that awaits us as women is seldom so straightforward—first we must be given an impossible task, at which we must fail, and in this way come to deserve the violence that befalls us. So there she is, Vasalisa, trapped in a house with a violent tyrant, and the witch says, “Complete this task before I return, or I’ll chop you up for paprikash.” Then Baba Yaga splits, leaving Vasalisa alone with the enormity of this task, whatever it is: sorting grains of dirt from poppy seeds, or moldy wheat from sound, or an interminable pile of laundry, whatever.

Don’t ask yourself why she doesn’t just run while the witch is away; at this point in our girl’s life, in the absence of healthy role models, she has become irrationally devoted to the completion of impossible tasks, which is how she wound up here in the first place. (And don’t get me started on the statistics about girls who run from situations like this.) Also, don’t ask why she sits there crying, blaming herself for her own captivity, beating herself up for being too dumb to know what to do now. (You might consider yourself smart, but in a world like this one, it could happen to you.)

IIX.
Ask yourself instead how it occurred to her to take the doll her mother gave her when she left home.

Ask how she knew enough to keep that doll concealed in the secret pocket of her skirt.

Ask why she had a secret pocket to begin with.

The answer is: Whether Barbie or Raggedy Ann, Cabbage Patch or the doll made by the neighbor lady—who may, in fact, have been a witch—that doll is the most precious thing in the world to our girl.

The answer is: Baba Yaga is the queen bitch of Russian witches, with an eye like a magpie, and her house is filled with items she’s obviously lifted from her victims.

The answer is: Vasalisa is a very fine seamstress, and she has sewn a secret pocket not only in her clothing—the better with which to keep secrets from her stepmother—but in her DNA.

In this pocket is the accumulated wisdom of all her female forebears, encoded in every thread, and though she cannot read it, the doll her mother gave her can. That’s how that doll comes to life and completes that impossible task, sorting the seeds, and the moldy wheat from the sound, and the darks from the lights in that interminable pile of laundry. Despite the violence with which we are constantly threatened, or perhaps because of it, women have been accomplishing impossible asks for a very long time—and what is Vasalisa if not the daughter of a woman who survived? (Long enough, at least.)

And while we’re telling secrets, here’s one patriarchal cultures like to keep: if you take Hansel and Gretel out in the woods and leave them there to starve, it’s more likely that Gretel will be the one who lives to tell the tale. Girls are also more likely to survive premature birth, and to bounce back from childhood trauma.

If you do, Baba Yaga will turn you loose; she’s not interested in a blessing of any kind. Or at least that’s what she claims. Sometimes, in the right light, she resembles a distant matrilineal ancestor of yours—indeed, of any girl’s. And really, she’s far kinder to Vasalisa than she has to be: see how she gathers some nice, hot coals in a fresh, clean skull, shows the girl to the door, and sends her on her way.

IX.
Imagine the wicked stepmother’s fright when she saw that freaky jack-o’-lantern come bobbing through the woods. Imagine how that crazy lady exclaimed when the hot coals Vasalisa had returned with leapt up in fierce flames from the family hearth. Imagine her screams as those flames roared out and engulfed her, leaving Vasalisa maybe a little sweaty but otherwise nonplussed. A woman’s rage, once she’s claimed it, is a powerful thing, and to anyone who’s been paying attention, it should require no explanation--but of course Vasalisa’s father had not been paying attention, otherwise he never would have left her alone with that wicked stepmother in the first place. So when he finally returns from that business trip, Vasalisa sadly explains about the house fire, and with whatever small sum he’s able to squeeze from their cut-rate insurance policy, they move to St. Petersburg, where’s Dad’s business is based.

Enterprising Vasalisa goes to work for a local seamstress, sewing exquisite satin ball gowns with secret pockets, which soon are all the rage with the ladies at the tsar’s court—like poison rings, and for the same reasons. Though privileged, these ladies are faced daily with indignities that make their blood boil, and they cannot afford to be open with their anger, the way Baba Yaga would have them, so a pocket just big enough for a dainty derringer or a stealthy stiletto is ideal.

Soon news of Vasalisa’s artistry spreads, and a representative of the tsar himself arrives with an order for a set of tunics. Vasalisa’s dad is anxious about the big opportunity, and he paces the apartment all night, imagining the orders that will pour in if the young tsar is pleased; perhaps he should set Vasalisa up in her own shop and keep a percentage? Vasalisa’s employer, for her part, is terrified: What if the young ruler is displeased? The timeline he’s set is ridiculous, untenable: the tsar must have five tunics in five different colors by this famed young seamstress in time for the fall ball (apparently, he likes to change his tunic after the exertions of each mazurka), and what do you know, the fall ball is tomorrow.

No sweat, says Vasalisa, you close up shop, and I’ll work late tonight. And of course, as soon as the seamstress has set off down the cobblestones and the streetlamps have been lit, Vasalisa pulls the curtains, and her mother’s doll is hopping out of her pocket. The work together, Vasalisa and the doll, as the moon rises and the oil in the lamp beside her burns down, and in the morning, when the tsar’s representative arrives, she presents him with a set of tunics so luxuriously lovely, sewn with stitches so fine, he cannot help but stare. The seamstress too arrives and sends Vasalisa home to get some rest, relieved, and Vasalisa does, hiding her yawn behind her hand.

She passes out as soon as her head hits the pillow, and when she wakes, her father is grinning, holding a gilt-edged letter: The tsar is so impressed with Vasalisa’s shirts he’s just got to see her. So Vasalisa dons her finest gown (a commission from a courtier who’d gained some weight since her measurements were taken) and sets off for the swirling onion domes of the palace.

And because Vasalisa is very pretty—did I mention that?—the tsar falls in love with her and takes her to the ball that night, and before long they’re married, and of course live happily ever after.

And here’s the kicker: After all that Vasalisa endured and overcome, by her courage, her wits, her skill, her rage, her mother’s blessing, and her irrational dedication to the completion of impossible tasks, the name of this story is “Vasalisa the Beautiful.”

Which, if anything, should tell you something about why so many woman have female complaints.

Which, if anything, should tell you something about what it takes to endure as a girl.