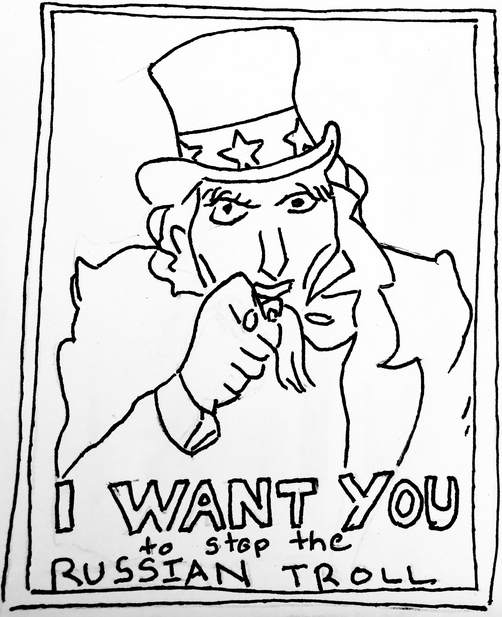 This month I published a little zine to my Patreon page entitled “The Illustrated Field Guide to Russian Trolls.” This timing was deliberate, because while the original version of this little tongue-in-cheek piece–which treats Russian trolls as an invasive species here on US soil–was created following the 2016 election, when it became clear that nefarious foreign agents had used a disinformation campaign to discredit Hillary Clinton, I knew that they would once again strike in the 2020 election season, in an attempt to discredit Joe Biden.

And this week, that’s exactly what they’ve done.

Hunter Biden, Joe’s son, is once again in the news, under scrutiny for his dealings in Ukraine and alleged involvement in helping an energy company escape a criminal investigation. But this time around, what’s under just as much scrutiny is this alleged news itself.

Hunter Biden, former VP Joe Biden’s son, is getting a lot of attention these days.

His alleged emails. Exactly one week ago, the New York Post published an unverified story about former VP Biden and his son’s dealings with Ukrainian energy company Burisma. (Sound familiar? That’s because it was at the center of President Trump’s impeachment.) The claim: that Hunter Biden’s emails show he arranged a meeting between his dad (who was VP at the time) and a Burisma exec in 2015. And that this may have helped Burisma (and Hunter – who was on the board of the co) escape a criminal investigation. But many news orgs and social media companies approached the Post’s report with skepticism and limited its distribution.

The chain of events that led up to the story is raising red flags. The owner of a computer repair shop in Delaware alleges that someone who identified himself as Hunter Biden came in and dropped off his laptop there last year. Then, the owner reportedly tried sending it to the FBI. But first made a copy of the hard drive for himself. Then, Trump’s lawyer Rudy Giuliani got a hold of the copy from his own lawyer. The Post claims it learned about the hard drive from former Trump adviser Steve Bannon. And then obtained the ‘receipts’ from Giuliani. Still following?

Great. Former VP Biden has denied the allegations. His campaign also said the then-VP’s schedule showed no formal meeting with a Burisma exec at that time (but didn’t rule out an informal encounter). Hunter Biden’s stayed mum about the whole ordeal. Meanwhile, Trump’s talking about this. A lot. (Both on Twitter and at his rallies). And he’s calling on AG William Barr to investigate the Bidens – something two Republican-led Senate committees have already done. They didn’t find any wrongdoing from the former VP.

And what are others saying?

Many have come out saying ‘this story reeks.’ It’s not clear if the emails are real. Fox News reportedly passed on the story when Giuliani offered them the scoop because of credibility concerns. Earlier this week, dozens of former intel officials wrote a letter saying the Hunter Biden story “has all the classic earmarks of a Russian information operation.” But the director of national intelligence says ‘not true.’ Now, the laptop is reportedly in the FBI’s hands. But others are zeroing in on the story’s timing and Giuliani’s involvement (think: he’s allegedly coordinated with Russian agents to gather info that he thought would hurt the Bidens). And US intel officials have warned that the Kremlin’s trying to interfere in this year’s election in favor of Trump.

The US is no stranger to Russian election interference (see: Hillary Clinton’s emails in 2016). Just this week, the DOJ indicted six Russian military officers for major hacking attacks from the last four years. As we inch closer to the election, experts are warning voters not to trust every story they hear.

These are stressful times, friends, so it’s important to maintain our sense of humor–and our vigilance against disinformation. That’s essentially the message of “The Illustrated Field Guide to Russian Trolls,” which I hope helps to alleviate some election stress for you today, even as it offers an important reminder: It is now every American’s patriotic duty to stop the Russian troll–and get out there and vote #bidenharris!