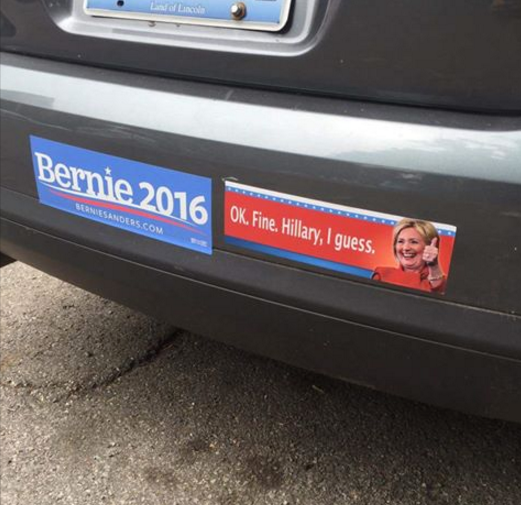 Today, Robert Reich posted the picture above–which, in light of Bernie Sanders’s recent endorsement, sums up my feelings exactly. But not all of my friends feel the same, especially those younger and to the left of me (which is really quite left indeed).

I think there’s a great danger in assuming that everyone who’s on the other side of the political spectrum from you is the same, and in taking a singe-issue stance. Believe me, my friends on the left, I was just as bummed as you were when Obama came out pro-surveillance, pro-drones, and pro-TPP. But that doesn’t make him George W. Bush.

I’ve had pro-Hillary friends post things like, “Show me how Hillary’s policies are substantially different from Obama’s or STFU.” And I think there’s some wisdom in that: Barack is a far more inspiring speaker, and he’s not an old-school operator like Hill, not nearly so entrenched in an increasingly corrupt political system.

But in terms of their policies, they’re not so far from each other, and as far as I can tell, that’s what my leftist friends resent: they feel betrayed by the fact that Obama turned out to be a centrist, and that the center of the American political system has drifted so far to the right. They want to rebel by voting for Bernie or no one, and now they feel betrayed that Bernie has endorsed Her.

First, I’d like to make it clear where I stand: I believed Bernie Sanders when he told us it would take a political revolution to make his policies reality, because no president could possibly do what he promised without a majority in Congress on his side.

Second, I believe him when he said, in the course of his email officially endorsing Hillary,

In terms of the presidential election this November, there is no doubt that the election of Donald Trump as president would be a devastating blow to all that we are fighting for. His openly bigoted and pro-billionaire campaign could precipitate the same decades-long rightward shift in American politics that happened after the election of Ronald Reagan in 1980. That rightward shift after Reagan’s election infected not just politics as a whole but led to the ascendancy of the corporatist wing of the Democratic Party–an era from which we are still recovering.

I cannot in good conscience let that happen.

I cannot either, and for some reason, I had assumed that more of my fellow Bernie supporters would be with me on this–especially when the Republican National Committee has moved toward adopting what the New York Times calls “a staunchly conservative platform that takes a strict, traditionalist view of the family and child rearing, bars military women from combat, describes coal as a ‘clean’ energy source and declares pornography a ‘public health crisis.’”

It’s also a platform that all but declares open season on gay and transgender people–which has led close gay friends of mine with roots in the Midwest to tell their friends and family, in no uncertain words, that a vote for Trump will endanger them and those they love.

These are the same people I’ve seen kindly and open-mindedly engaging conservative friends and relatives on everything from women’s reproductive rights to drone warfare. These are not knee-jerk liberals. And they are scared for their lives.

I’ve seen the same thing from Hispanic friends on Facebook. Again, from people with close conservative friends–people who may be pretty conservative themselves, in terms of “traditional family values.” It’s clear that they too are scared for their lives, and for those of their family members.

My far-left friends are no fans of Trump, so they believe that the only way they can live in accordance with their consciences is simply not to vote at all. They believe that the line about “not voting at all is a vote for Trump” is no more than corporate media propaganda.

Of course corporations of all types would love to have Hillary in office; she plays the game the way they’re used to having it played (not unlike our disappointingly moderate friend, Barack Obama). And yes, she’s a hawk. Yes, she “moderated” her position on gay marriage and a host of other things when it became politically expedient to do so.

But Trump, as far as I can tell, is a person possessed of a mental disorder that does not allow him to process information that does not agree with what he already believes. This is a condition we all have to a certain extent, but at a narcissistic extreme, and I can think of nothing so dangerous to the future of our country as a man this unintelligent, unkind, and unthinkingly bigoted in the White House–if for no other reason than what will undoubtedly erupt during such a presidency from similar elements of the populace.

However, I know how stubborn you are, my far-left friends. You are people of principle, ones who have never taken the easy way out, and I love you for it.

I know I will not convince you of my position, just as you will not convince me of yours. But if all the millennials and lefties who voted for Obama don’t vote in November, it really will be the equivalent of voting for Trump.

Because hoo boy, is the right is ALL fired up about this “fascist Muslim liberal” that country accidentally elected (twice), and you can bet your bottom dollar those old folks will not be sitting this one out, however much Trump might alarm them.

So friends, I’m asking you to prove me wrong–not by voting for Hillary, but by voting. Period.

Bernie was right when he said no president can do it alone. Really, presidential politics is pretty much a cult of personality–it’s Congress that has the real power. So go ahead and leave your preference for president blank–or hey, vote for Jill Stein. (She’s awesome. I attended a day-long climate protest with her in May, and she was down there in the trenches with us, breathing the acrid air of the March Point refinery; I love her for that.)

But vote down the ticket, and vote for Berniecrats like Lucy Flores (NV), Zephyr Teachout (NY), and Pramila Jayapal (WA)–vote for the ones who were principled enough to endorse him. (You can find a complete list here.)

And if you don’t live in a state where any of these individuals are active candidates for public office, consider phone banking and working on GOTV efforts on their behalf.

Yes, we may yet wind up with what the good people of Scotland have termed a “mangled apricot hellbeast” and a “bloviating fleshbag” (among other things) in the highest office of the land. And if so, we’ll no doubt see the darkest shades of America’s bloody past step out into the light of day, visiting violence with impunity upon those we love.

But we will at least have kept Drumpf from enacting the sort of policies his fevered brain seems to favor (like building “The Wall,” punishing ladies who get abortions, and keeping Muslims from wearing “hibby-jobbies“). Much the way the conservative right has kept Obama from doing much more with his time in office than giving fist-bumps to the janitor and playing hide and go seek with kids.

In solidarity (and dissent),