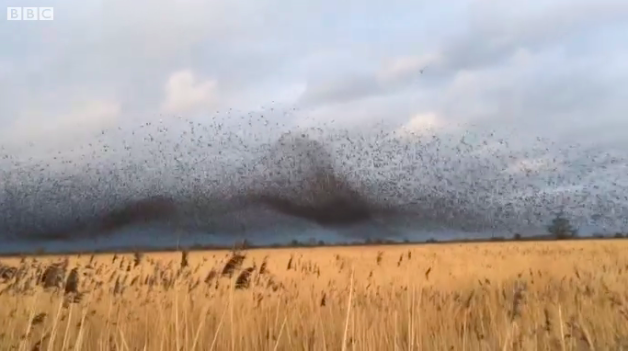 How can a group of birds, flying en masse, so closely resemble the shifting forms of a wave?

And if this beautiful phenomenon is a fact of our world, what does it mean?

Sometimes I suspect that certain forms, certain shapes, are strange attractors in space and time. That the shapes characteristic of fluid dynamics are found in water and wind and flocks of birds because small things, moving together in accordance with a few local rules, are and always will be drawn to make them. That when Homo sapiens branched off from Homo erectus and developed longer legs and a more upright head, it was, in part, because our species was drawn into the spiral of the Golden Mean, Da Vinci’s Vitruvian man.

Also, like most writers, I’m fond of the different names given to groups of different animals. How lovely that a group of starlings arrayed in flight is not a flock but a murmuration, for the sound of their wings.

A whisper, maybe, of our collective potential.