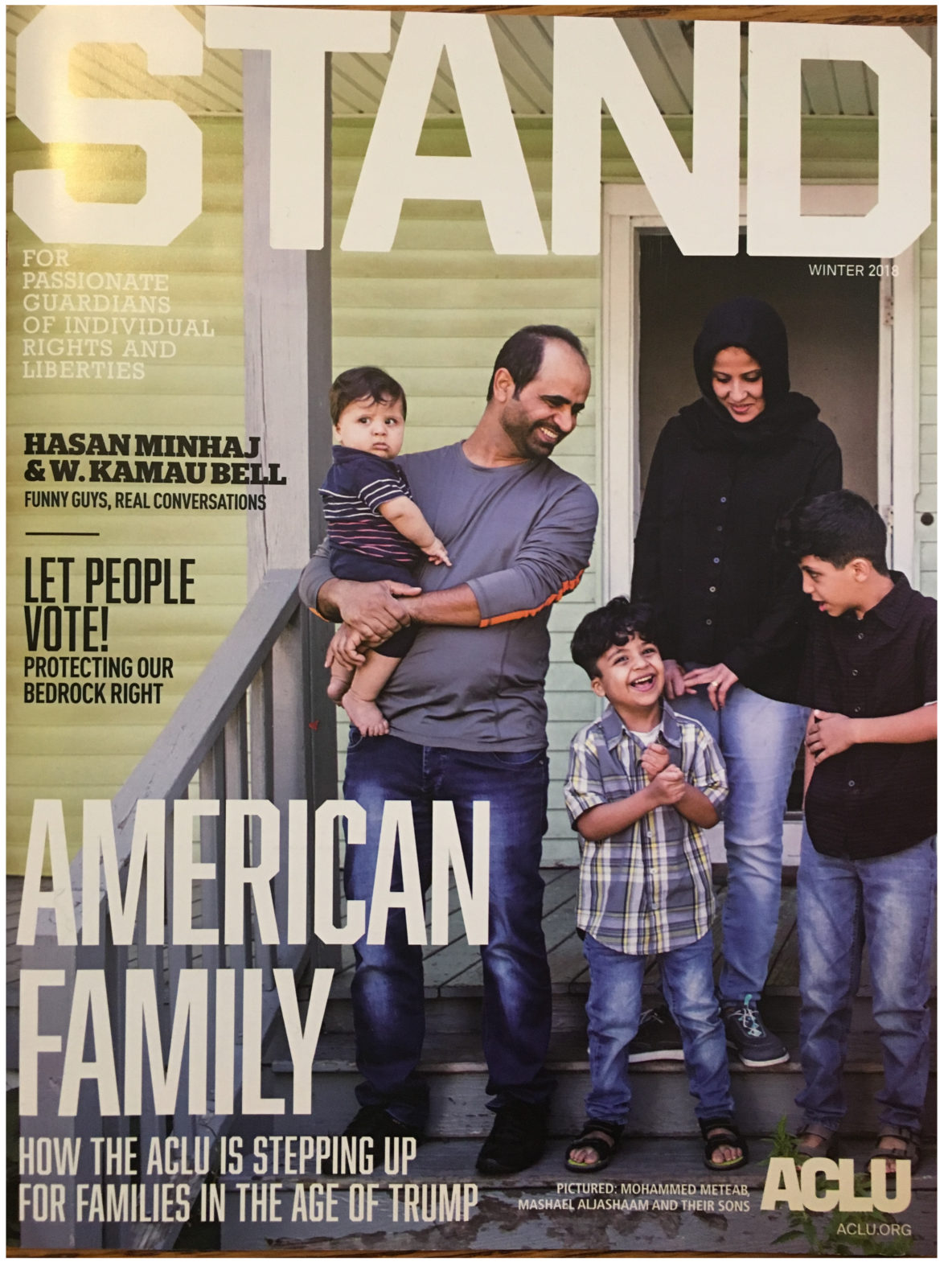 After church yesterday, at Pastor Rutledge’s urging, I read Martin Luther King, Jr.’s “Letter from Birmingham Jail”—a justly famous missive, which makes the case for nonviolent direct action and calls out those who condemn it as a tactic.

MLK said he was disappointed most by white moderates, stating, “I have almost reached the regrettable conclusion that the Negro’s great stumbling block in his stride toward freedom is not the White Citizen’s Counciler or the Ku Klux Klanner, but the white moderate, who is more devoted to ‘order’ than to justice; who prefers a negative peace which is the absence of tension to a positive peace which is the presence of justice…”

It’s a charge that of course rings true today, as does King’s censure of his fellow clergy members for valuing status quo over conscience when he said, “In the midst of blatant injustices inflicted upon the Negro, I have watched white churchmen stand on the sideline and mouth pious irrelevancies and sanctimonious trivialities” (aka, “hopes and prayers”).

My mother-in-law noted over dinner last week that there were many parallels between the present moment and the late 60s, which (as we know) was when both MLK and Bobby Kennedy were shot. Athletes then were raising the Black Power fist at the Olympics; athletes now are taking the knee. Now, as then, there is the sense of a nation divided, on the verge of tearing itself apart; now, as then, we’re experiencing a great reckoning with the historical injustices on which this country was built. Now, once again, feminism (Merriam-Webster’s 2017 Word of the Year) is in the headlines; now, once again, the specter of nuclear war casts its long shadow over us all.

In the last few years, in the face of one tragic killing after another, I have felt an intense, nearly intolerable urge to aid in the struggle for racial justice in this country. I actually posted something online to the effect of: “Where are the freedom marches and bus boycotts of our time? What are people of conscience supposed to do?” I joined an organization called SURJ (Showing Up for Racial Justice) and shared their information and signed their petitions but, ultimately, I didn’t do a whole lot more.

Whenever there was a Black Lives Matter protest, I always seemed to find out about it too late. Or I’d mark it on my calendar but wind up chasing down a deadline instead. Or I’d find myself discouraged by the weather. One way or another, I failed to make to these protests, the way I failed to make it to so many others, because when it comes down to it, I don’t like protests. I cannot summon outrage at will, at least not in a public way; I have a low tolerance for poor speakers, or poor sound quality, or boredom in general, and let’s face it: protests can be boring. So, though I signed up to Show(ing) Up for Racial Justice, I have, for the most part, failed to show up anywhere but online.

Showing up online is better than mouthing “pious irrelevancies and sanctimonious trivialities,” but to my mind, not much.

I know full well that “freedom is never voluntarily given by the oppressor; it must be demanded by the oppressed.” Know too that folks of color must be met by middleclass whites (and those who pass as white) willing to risk their comfort to further the struggle—know too the many disappointments friends of color have faced at the hands of their so-called allies. I don’t want to be one of those people, the well-meaning ones who value their own comfort more than they do their neighbors’ lives.

And yet I have failed to take action, time and again. I have failed to recognize the opportunity before me as one of the only opportunities I will ever have. On my own, I have failed to respond in time, to seize the moment, and to act when it counts. Which is part of why I have sought out a progressive church community—to keep me honest, and to carry me along in the necessary struggle toward justice. A community that will be attending the Women’s March here in Charleston en masse this coming Saturday. (I will be there. Come say hi!)

Yes, I have a conscience. But left to my own devices, I often find excuses to disregard it. I let myself believe that because I’m not doing wrong I’m doing right.

Like any habit, I think, turning good faith into good works—e.g., showing up—gets easier as it becomes more routine. And rather than trying to do everything, it’s a matter of just doing a little more than you already are.

Last year, I joined the ACLU and the Union of Concerned Scientists, and one thing I did show up for was the Science March. I also got comfortable calling my elected representatives.

This year, I am ready to attend more protests that address the critical struggles of our time—the struggles for social and economic justice, and for science and the environment. Moreover, I am ready to do so in a spirit of joy. In costume, if need be—whatever it takes to make showing up feel like an act of love. Because being there for each other, physically and personally, may be all there really is in this life that matters.

I am ready to volunteer my time and skills in some way that might make a difference, especially to young people. And I am ready, most of all, to dig deeper into my own heart, my own conscience, and to use my voice in a way that matters—not just at some point down the line, but here and now.

I know that that I’ve done more than some and less than others; rare is the person who has no room to move, morally speaking. What can we do but keep listening to that voice within, recommit ourselves, and try again?

And yet, even as we commit ourselves to doing more, I think it’s important to recognize the victories we have already won—because the victories never seem to capture the headlines the way the outrages do.

Just this last week, Walmart announced that it’s raising its starting wage to $11/hour, expanding parental leave, and giving a whole lot of employees a long-deserved bonus. And not only did New York City divest from fossil fuels, the city is actually suing the fossil fuel industry for climate change-related damages. (Let us not forget that it was the global divestment movement that finally toppled apartheid in South Africa.)

And remember how I said I joined the ACLU last year? Recently I received the latest issue of the organization’s magazine, STAND. Pictured on the cover, which I’ve included above, are Mohammed Meteab, Mashael Aljashaam, and their sons—an Iraqi refugee family living in Massachusetts, whose loved ones have been prevented from entering the US, though they were approved for immigration, by Trump’s suspension of the program they were approved under.

There’s a lot to these folks’ story, and to the suit that the ACLU is bringing against the government on their behalf. But I’d like you to put all that aside for just a moment to gaze upon this adorable little chunk of a baby boy in his daddy’s arms. 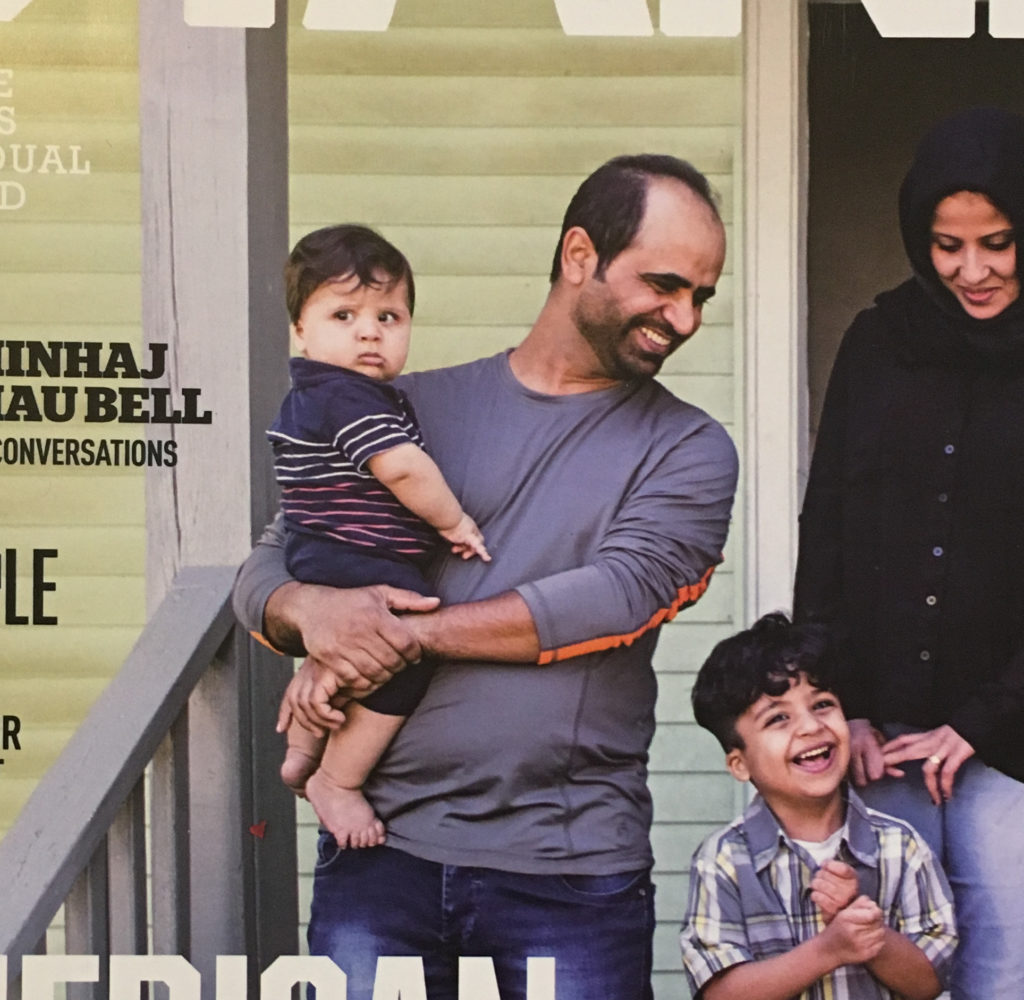 This is an Iraqi-American child, whose family is Muslim. There is no doubt that he will face discrimination as he grows up. But right now, he doesn’t know anything about that. His parents haven’t had to explain to him what racial slurs are—they haven’t had to stammer and find their tongues twisted, as MLK put it, in trying to explain why he shouldn’t go certain places or play with certain kids (the way maybe they’ve had with their older sons).

This kid has never had to face shitty insults or prejudice or fear on the part of white people—because he’s brown, or because they think his daddy is a terrorist, or because his mommy wears a headscarf. He’s never, as MLK put it, had his personality demeaned by racial hatred—moreover, this kid has no idea about the environmental crisis, about the plight of the real animals that his stuffed animals represent. (Though he does seem a little worried all the same.)

He’s just a chunk! A beautiful little chunk of a baby, like so many other babies in this country, and in the world at large, who deserve a better future than the one that currently awaits them. We owe it to them to show up.