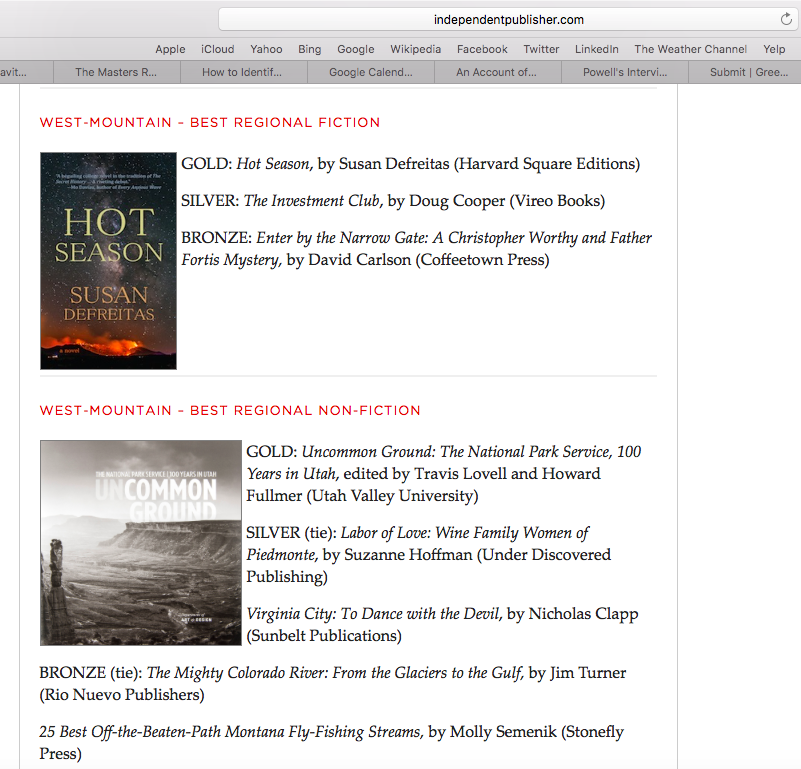 I’m pleased to announce that Hot Season has taken the Gold Independent Publishers Association (IPPY) Award for Best Fiction of the Mountain-West in 2016.

The news of this came to me, oddly enough, via Facebook Messenger. I was at the Independent Book Publishers Association conference here in Portland over the weekend, which also offers an award for independent and small-press books (the Ben Franklin). Here I was, hanging out with all these great authors, many of whom were finalists for this indie award, when I received news of my own.

That news came via Kase Johnstun, a buddy of mine from Pacific University. The Internet connection in that room was not so hot, so all I saw at first was the text: “Congratulations!” Imagine my surprise when .jpeg came through–it was a screen shot of a webpage listing the winners.

How had Kase gotten word of this before I had? (I actually checked the date to make sure this wasn’t some terrible April Fool’s prank.)

As it turned out, that notification email–as well as all of the other communications about the award–had wound up in my Spam folder. Doh!

As an added bonus, the IPPY awards ceremony is scheduled for May 30th in NYC at the Copacabana, so, as you might imagine, I’ve had this stuck in my head ever since.