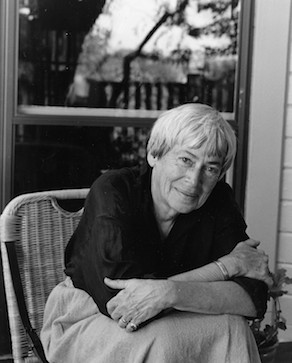 This is the second week in a row that an interview with Ursula K Le Guin qualifies as the best thing I’ve read all week–though in this case I listened to it, as I do many author interviews, on David Naimon’s podcast, Between the Covers.

Naimon is a master of this type of interview, or perhaps it would be more accurate to say literary conversationalist. His questions rarely seem standard or formulaic, and he’s got the chops to keep pace with brilliant folks like Anthony Doerr, Kelly Link, Mary Reuffle, and, yes, Ursula K. Le Guin, to name just a few (including that author you’ve been hearing so much about, Viet Thanh Nguyen, who recently won the Pulitzer for his debut novel).

In this interview with David, Le Guin talks about her lifelong relationship with poetry; how writing about the natural world at this time in history cannot help but be “political”; her abiding interest in Taoism; the objectification of Descartes and men like him, who privileged themselves with the notion that a dog was a kind of machine, to do with as they would; her desire to “subjectify” the world through art, to exist in relationship to it, kinship; the idea that science and poetry reveal the inside and the outside of the natural world, respectively.

She also expresses a far-out idea that I cleave to myself, which is that not only are we kin with animals and plants in deeper ways than we are comfortable accepting at this time (because of what we have done and are doing and would like to continue to do), but what we think of as insentient “stuff” may be alive in ways we can’t yet begin to understand.

If all that wasn’t enough, Le Guin is also a phenomenal poet (go figure).

If you like it, consider subscribing to the podcast on iTunes and supporting this series with a $1/month contribution, as Between the Covers–like me!–is on Patreon, a crowdfunding platform designed to provide ongoing support for creative people.