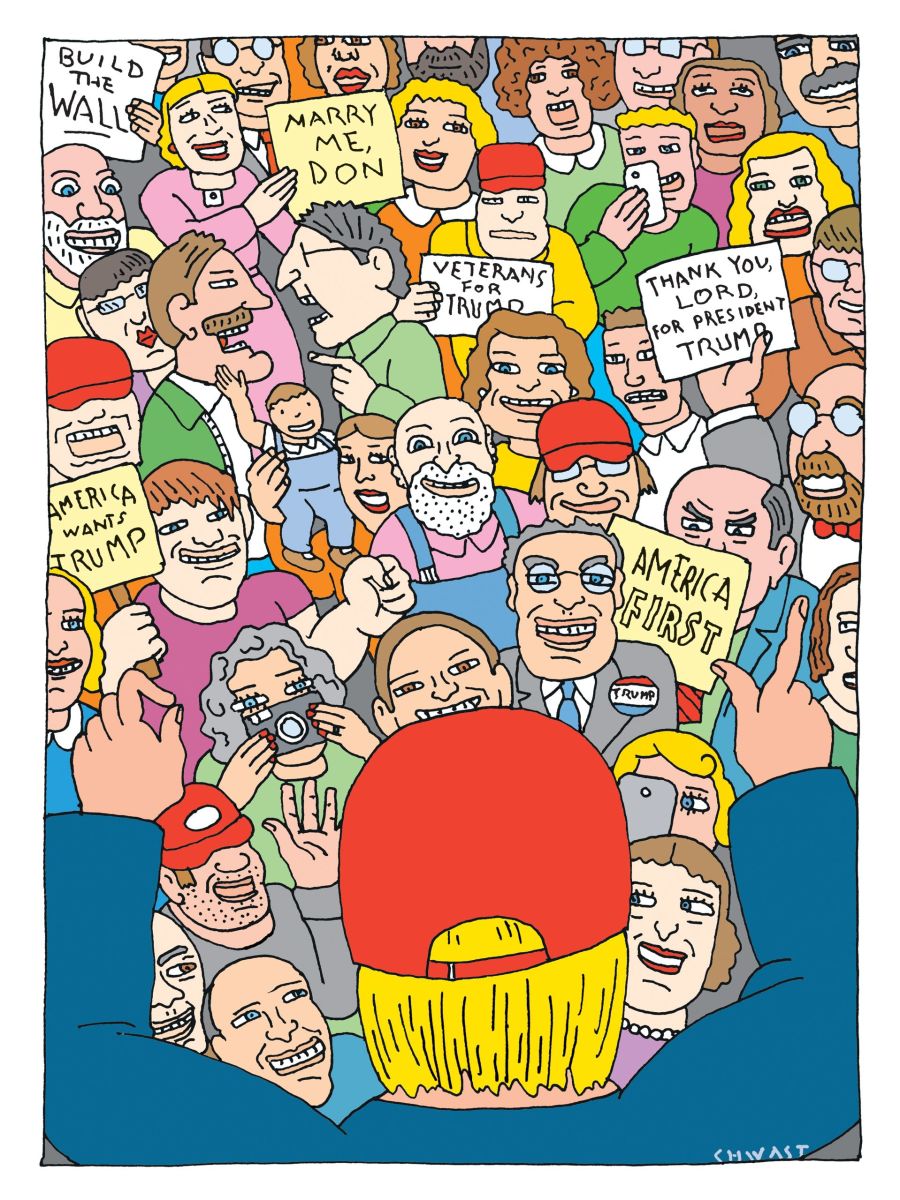 I admire George Saunders as an author not just for his immense artistry but for his moral vision–one that, to my mind, always seeks to balance empathy for the individual with a clear-eyed critique of society. Who better to assess the state of the Union in this immensely divisive election year?

Apparently, the New Yorker felt the same, because they sent Saunders on assignment to a Trump rally, where he proceeded to engage with Trump supporters on a wide range of questions, from immigration to welfare, as well as with Trump protesters.

At this rally, Saunders sees the ugliness on the left as well as on the right. And as any fan of his work would imagine, no measure of absurdity is lost on him–there’s a kind of humor to this article as well as insight and despair.

If you are, as I am, a sentimental middle-aged person who cherishes certain Coplandian notions about the essential goodness of the nation, seeing this kind of thing in person—adults shouting wrathfully at one another with no intention of persuasion, invested only in escalating spite—will inject a palpable sadness into your thinning, under-exercised legs, and you may find yourself collapsing, post-rally, against a tree in a public park, feeling hopeless. Craving something positive (no more fighting, no more invective, please, please), forcing yourself to your feet, you may cross a busy avenue and find, in a mini-mall themed like Old Mexico, a wedding about to begin. Up will walk the bridesmaids, each leading, surprisingly, a dog on a leash, and each dog is wearing a tutu, and one, a puppy too small to be trusted in a procession, is being carried, in its tutu, in the arms of its bridesmaid.

And this will somehow come as an unbelievable relief.

Saunders describes how the conversations he was having with Trump supporters changed when they went from talking about something in the abstract (say, immigration) to something concrete (say, a kid brought here as an infant by her parents, illegally, and her tough choices as a young adult). He notes that the tenor became far more civil; they became two people honestly trying to figure out how to help this hypothetical person without violating their own beliefs.

Which speaks to my own experience as an American. I grew up among conservative people in Michigan and lived among them in Arizona, and while I find many of the sorts of opinions they espoused antithetical to my idea of a civilized society (particularly on the subject of social services for the poor), I consider these people generally good at heart.

Which is why it has been so hard to believe those same people would support a man who has shown himself over and over, to be a bully, a bigot, and a toxic font of hate–the sort of person who thinks it’s funny to make fun of a disabled journalist.

To see that happening in this country has led me into much the same territory as Saunders, which is to wonder if what seemed impossible even five years ago might be true–that I might see the dissolution of the union within my lifetime.

The wheel of history is turning. Can the center hold?

Here’s the link to the article: http://www.newyorker.com/magazine/2016/07/11/george-saunders-goes-to-trump-rallies