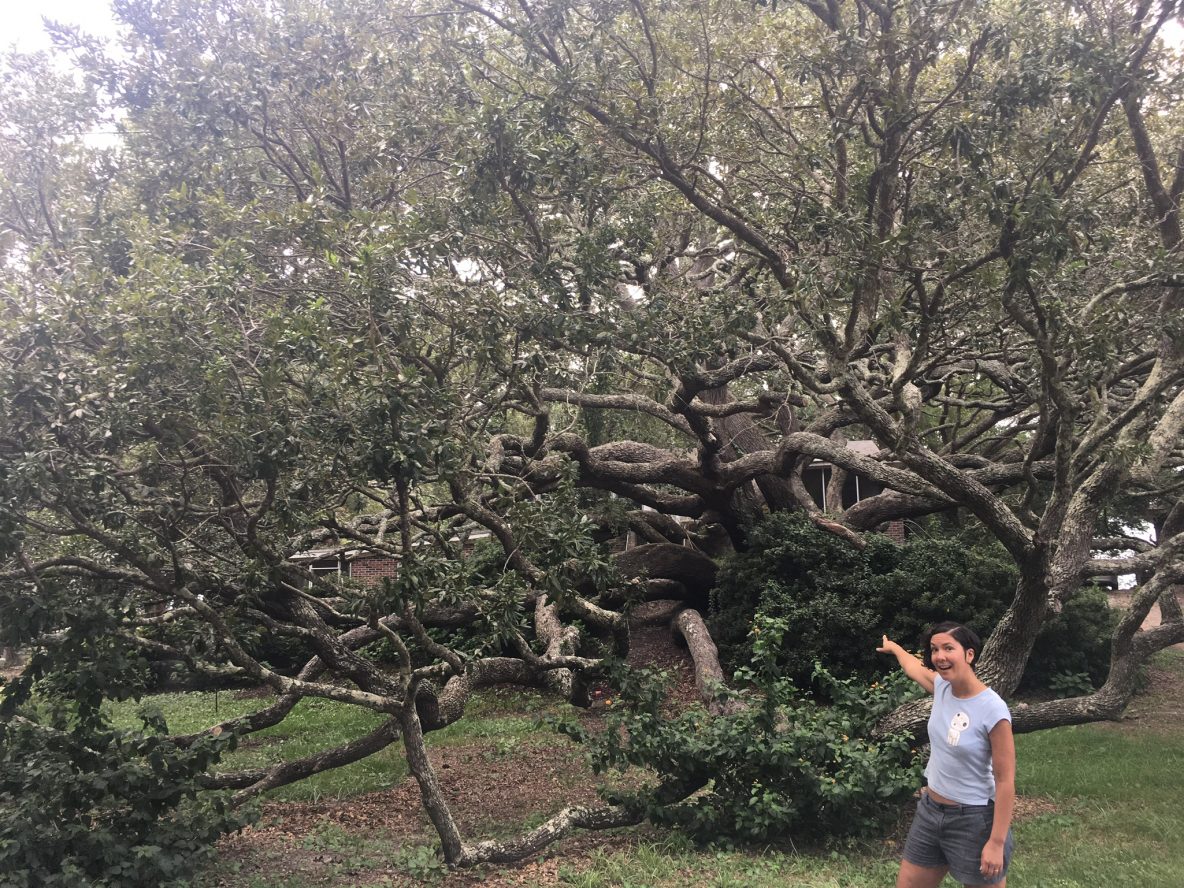 This free original story has been brought to you by my newest top-level sponsor on Patreon, Margaret Weiss. Inspired by Poe’s classic, “The Gold Bug,” this story is set on Sullivan’s Island, SC, where my husband grew up, and where I’m pictured, above, in front of the enormous live oak known locally as the Gold Bug Tree.

Secret writing is as old as writing itself. I remember Craig telling me that when we were kids—that writing itself was a secret from most people for a long time. He was smart like that. Brilliant, really. Knew three languages in third grade. Obsessed with cryptography. Pretty much a total nerd, which was why he’d had nothing better to do at thirteen than to hang out with me, a neighborhood kid three years his junior. I hadn’t seen him since—what? freshman year? He’d gone to a different school after his parents divorced. And now here he was on my folks’ front porch.

“Hey, Craig,” I said, feeling awkward, “long time no see.” I knew he wasn’t back home for Christmas, the way I was. Craig was home because his dad had died.

“Hey, man,” he said, but that was pretty much all I could make out, as what followed was a slurred string of syllables that bore little resemblance to any language at all.  His breath could have dropped flies in midair; apparently, he’d been mourning the old man’s passage the night before at Dunleavy’s.

I cleared my throat. “Sorry to hear about your dad.”

He shook his head. “Thadswhaddagetformeenafuckinshiheadformalife, you know?”

From what my mom had told me, Craig hadn’t been back in North America since his high school graduation, and for the past few years he’d been living on the beach in Costa Rica.

“Ohyear,” he said, and proceeded to launch into an explanation, or anecdote, or a tirade. Really, it could have been anything.

Those golden brown curls my mother had loved had gone frizzy and wild, and male pattern baldness had claimed new territory for his forehead. He was sweating profusely, though it couldn’t have been more than sixty degrees out, and his eyes were bloodshot. I found myself wondering if Craig had been bit by some sort of bug down there in the tropics—wondering if, even as he spoke, some spirochete was making Swiss cheese of his brain.

He shook his head. “Degumbochi,” he said. “Member?”

“Yeah, you always did like my mom’s gumbo,” I said. My friends from New York would have told Craig he wasn’t making any sense, and moreover, he looked like shit. Me, I just smiled, hoping whatever he had was not contagious.

“No,” he said emphatically, “degumbochi.” He rubbed his eyes. “Cheezuschristcomin.”

Hell, I thought, did Craig get religion? It seemed unlikely, considering the way he had delighted in torturing Bethany Baker (“And on the seventh day, God buried fossilized dinosaur bones”). But I knew Craig had done a lot of drugs in high school, and maybe, if he’d been trying to get clean?

“Kay,” he said, apparently trying a different tactic. “Member…” and then shot off a long string of gobbledygook. I leaned closer, trying to find a foothold in this mountain of nonsense, nearly lightheaded from holding my breath.

I cleared my throat. “Yeah,” I said, “I guess we did go to a cook out that one time, with the fire department.”

“No!” Craig’s eyes were fairly bugging out of his head. “Wheredessaplaceweedacaddacassacookout?”

I studied him. “Where is the place?”

“Oh,” I said, “I think that’s what we used to call the top of Fort Moultrie.”

He slapped his big sweaty forehead and stepped foot down the steps. “Comin,” he said, lifting a hand. And then, from the gate: “Cominman!”

It’s not as if I wanted to follow him, but my old friend was clearly in a bad way. He was only twenty-five, and his dad had just died. Also, it was ten a.m. on a Sunday, and my folks were still at church; it wasn’t like I had anything better to do.

Read the rest of the story at Patreon.