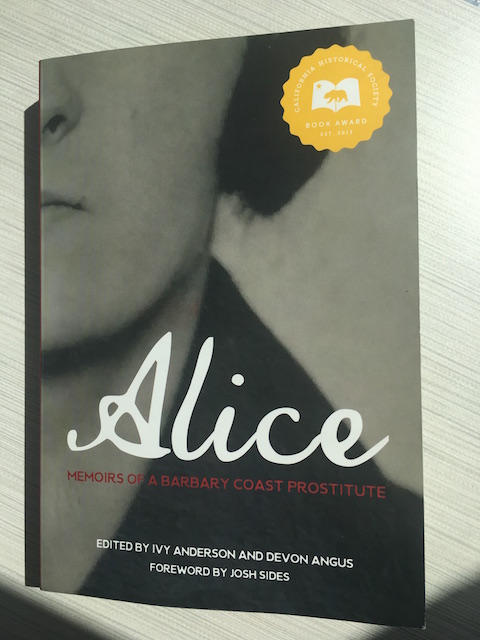 Mother Foucault’s Bookshop is distinguished mainly by two things: signs that read the use of mobile phones is prohibited, and books. Books piled up on the floor, on the stairs up to the landing, on the landing, in the windows, and of course upon the bookshelves themselves. Unapologetically leftist, it is as close to City Lights as Portland gets.

On a Saturday night, I found the renowned poet Walt Curtis spinning out the door, even as a gaggle of fellow geeks lingered around the glowing coals of a reading, just winking out.

I’d stopped in to talk to the store’s owner, Craig, which is how I wound up purchasing the memoir of a turn-of-the century San Francisco prostitute.

I’m not sure what I expected, but Alice: The Memoirs of a Barbary Coast Prostitute—first published in serial in the San Francisco Bulletin in 1913—rocked my world. And while other such memoirs published around that time were no more than sensationalist hokum, as the introduction explains, scholars have reason to believe that this story is true (though the subject’s name is a pseudonym).

“Alice” details her upbringing as a farm girl in Wisconsin, raised by her grandparents. From the first, her life was handicapped by the lack of a breadwinning male in the family (her mother died in childbirth, and her dad left Alice with her mother’s people when he remarried and went west). Her uncle filled that void until he himself married and had a family of his own to provide for.

At this point, Alice’s household descended to such a level of poverty that they could not purchase firewood. When the neighbors pooled their resources to deliver enough to get them through the winter, however, it was not an occasion of rejoicing for Alice—it was the biggest shame of her life. (“Never,” she said, “would I be able to hold my head up in public.”)

She took jobs that paid nearly nothing, cooking and cleaning for neighbors—and then her father’s mother came to visit. Grandmother Smith disparaged her country wages and promised Alice work paying five times as much in Oakland, California; she convinced the girl as a teen to accompany her on her trip back west, to meet her father.

But Alice found herself unwelcome in her father’s home (his new wife was apparently concerned about having someone else to support), and in Grandmother Smith’s Victorian household, even such chaste country customs as coed picnicking were cause for alarm.

Alice also found that her grandmother expected her to pay rent, and pay for her own washing, and food, and so forth—to the point where her expenses were pretty much five times they were back home, leaving her just as poor as before.

Alice soon found that everywhere she went, whatever kind of work she did, she was propositioned by men—and every time this occurred, someone managed to insinuate that it was she who was responsible for these advances.

Eventually, after working in restaurants and rooming houses, where she was habitually cornered, as well as a laundry (for barely subsistence wages), Alice defied her grandmother by stepping out with an older man, who paid for everything, asking nothing in return—until her grandmother turned her out. At which point this man set her up in an apartment and began to bring her “gentlemen callers.”

I wound up reading much of this book at Backyard Social, a spot in my North Portland neighborhood with lamps on the bar and Founders/Bulleit boilermaker of which I am fond. Even as the place filled up around me with conversation and noise, I underlined line after line, struck how relevant this memoir is, over a hundred years later—after women won the right to vote, to own property, to get credit and open a bank account in their own name, to birth control and abortion. I mean, you’d that think more would have changed.

But as the anarchist philosopher Emma Goldman pointed out in her response to this memoir, what really keeps women down is economics. In her estimation, they cannot earn enough to get by without a man, so they must either prostitute themselves or marry. And while the woman who chooses one is “good” and the other “bad,” it was Goldman’s opinion that the choices themselves were not all that different.

As I read this book, I was thinking of the wage gap (women make 80 cents to a man’s dollar, last I checked). I was thinking of some recent statistics: that on average, a woman has to have one more college degree as a man to earn the same amount. That unmarried women, whether they remain single or get divorced, are poorer on average than those who are married.

I think of the poverty of girls who either “choose” prostitution or are trafficked—many of whom (as I have learned from Rene Denfeld and other local advocates) have parents who are complicit. And why? Because those parents themselves are poor, and if they are female, have been subjected to much of the same. To paraphrase one of the women “in the life” who wrote in to the Bulletin in response to Alice’s memoir, “a poor girl don’t stand a chance.”

I thought too of the election of Donald Trump, and of the sorts of people who voted for him where I grew up, in one of the poorest counties in Michigan. It’s the sort of place where, as the author Ronald Wright put it, people don’t think of themselves as poor, they think of themselves as “temporarily embarrassed millionaires.”

Ask Alice. The shame of poverty in the US runs deep.

Much is made of poor teenagers seduced by the promise of bling who wind up dropping out of school for a life of crime. But if Alice is to be believed, that’s nothing new; she herself was so entranced by the beautiful clothes she saw in the shop windows of San Francisco that she, as a poor working girl, was reduced to tears.

The economics of American capitalism will not only keep you poor, it will rub your face in it. It will tell you that there is something wrong with you, that you should be so poor—just the way it will tell you, poor girl, that if a man cornered you, it must have been what you were wearing, or weren’t, something morally suspect in your nature.

Yes, things have changed, and continue to change. The night I found myself reading this book in a Portland bar, I was interrupted by two different men, but neither of them seemed interested in anything other than what I was reading.

The first was a slightly older gent who confessed to reading mainly espionage; I told him a bit about the book and (though I didn’t think he was quite the type) recommended he check out Mother Foucault’s.

The second was a tattooed dude around my age sporting a fedora. A bartender at Backyard Social, he too expressed interest in my reading material. When I explained a bit about the book, he went on for a while about William T. Volmann’s Rainbow Stories, which he (the dude) had apparently adapted into a screenplay.

Was the older gent trying to hit on me? Maybe, but there was nothing disrespectful about his approach; really, he seemed more interested in a book recommendation. (Sorry, gent. You’re not going to find any espionage at Mother Foucault’s, unless you’re interested in a leftist critique of US Cold War tactics.)

Was Mr. Fedora trying to mansplain prostitute memoirs to me? I mean, sort of, but I don’t mind being reminded to check out the gonzo work of Vollmann, and in fact I don’t mind engaging in a counterculture pissing contest, to a certain extent; for punks, old hippies, hipsters, and various other subcultures, that sort of thing is no more than a sort of ritual ass-sniffing.

Which is to say, I, a woman, purchased alcoholic beverages with money that I myself had earned—in my chosen profession, as an author and editor—and sat in a bar, reading a book, until sometime near midnight, relatively unmolested. As I have on numerous occasions. Reading Alice’s memoir, hailing from a time in which nearly any expression of independence indicated that a woman was “asking for it,” I couldn’t help but appreciate my freedom.

And yet it also occurred to me I am a married woman, whose husband earns twice what she does (though, to be fair, he has one more degree than I do, and he did not choose a career in the arts). I am also the daughter of a man who, though he divorced my mom, never for a moment stopped providing for me. I can afford to think of myself as independent, because when it comes down to it, I have the benefit of a man’s wage behind me, and I always have.

The very fact that I was sitting in this particular bar, with its rosé negronis and artisanal popcorn, was a reflection of my privilege—there is no lack of bars, even in progressive Portland, where I would not have been afforded the freedom to sit there and read undisturbed. Bars where it would be supposed that I was “asking for it.”

I’m writing this, I think, to remind myself of what it is that Alice was trying to say, which is the same thing that so many of the women “in the life” who wrote in to the Bulletin were trying to say, and which Rene Denfeld often points out as well.

Which is that sexism is magnified by poverty, and any sort of feminism that does not address basic economics is no type of feminism at all.

It’s easy to think the world has changed for the better when you’re not on the bottom—easy to think you’re independent when you’ve got support. But no one knows how firmly the capitalist playing field is still slanted toward men than the “poor working girl.”

Marxism is fallen out of favor these days, and class warfare is unpopular with temporarily embarrassed millionaires. But as the turn-of-the-century San Francisco madam Reggie Gamble put it, in addressing a congregation of self-proclaimed vice-reformers,

“If you want to stop prostitution, sop the new girls from coming in here. They are coming into it every day. They will always be coming into it as long as conditions, wages, and education are as they are. You don’t do any good by attacking us. Why don’t you attack those conditions?”

Toward that end, I’m taking some of my hard-won wages as a female professional in 2018—just over a hundred years after the original publication of this memoir—and making a recurring monthly donation until the midterm elections aimed at helping to elect the historic number of women running for Congress this year.

Having more women in government will not automatically address these issues. But as far as a place to start, it seems as good as any.

Like my blog? Want to support my work? Consider becoming one of my literary patrons for as little as $1/month.