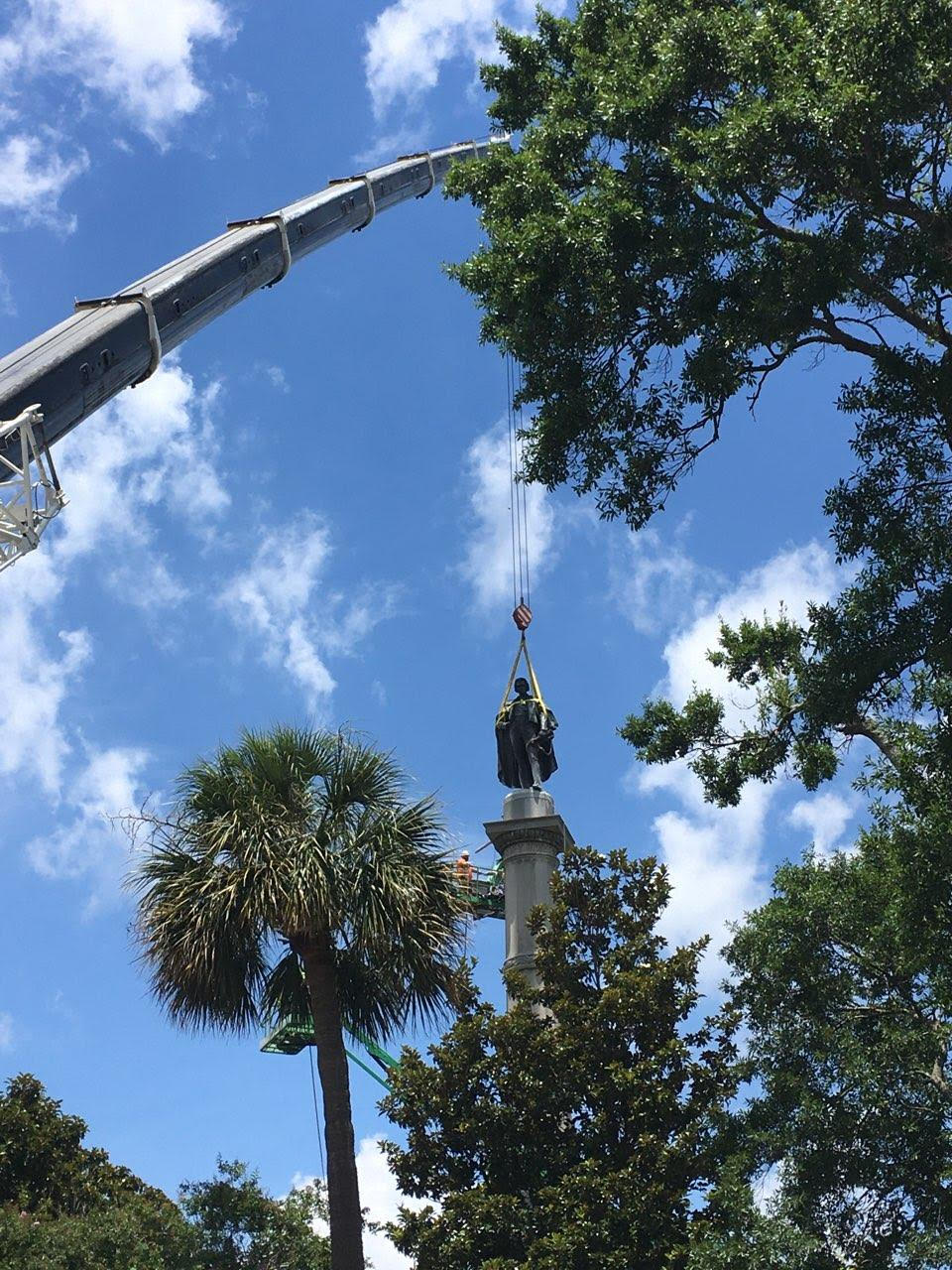 Y’all, something AMAZING happened last week: the statue of John C. Calhoun in downtown Charleston, SC–where my husband is from, and where we lived from 2016 to 2018–was taken down, in recognition of its racist history.

As my brother-in-law recently explained it online, “Calhoun was a pro-slavery White supremacist, who also had a career as a politician. He was the VP for John Quincy Adams and pushed for the War of 1812. After the Civil War his relatives had this statue erected here in the center of town. Then, when the good people of Charleston expressed their opinion of Calhoun by repeatedly vandalizing the statue, that statue was moved 115 feet up, beyond the reach of the public. There it has stayed, until today.”

That statue stood for nearly 140 years, but as of today, it’s history.

In honor of this (literally) monumental event, I wanted to share a piece of flash fiction I wrote while I lived in Charleston. Because, get this: this is a piece of climate fiction, set in a future version of the Holy City that looks a lot like Venice, due to sea level rise–and while I had no problem at all imagining gondoliers trolling the streets downtown for high-quality plastic trash and tourists paying good money for scuba tours through historic churches, I apparently could not imagine that giant statue of John C. Calhoun, which I walked past every day, ever coming down. (It’s noted in this story as “the white man in the sky” because of how high up the damn thing was.)

Which serves to remind me that no matter how imaginative we may be as artists, we all need to push ourselves further, especially when it comes to imagining what a just world might look like.

Here’s the beginning of “Queen of the Sunken City,” which was published last year by (appropriately enough), the Sinking City Review:

The King of King Street poled his skiff across Calhoun, looking for his queen. Sometimes in the mornings she could be found around Market, meeting her day’s appointments with “dem tourists from foreign,” as his granny used to say.

Tourists had been coming to the Sunken City of the South since long before it had sunk—coming to see the Rainbow Row and the Battery and the grand old churches built upon the backs of slaves. Coming to take the tours, most of which omitted such distasteful details.

Tours such as this one here on Calhoun Street—which, like all of the streets downtown, was no longer a street at all, but a glittering canal, reflecting the half-submerged historic homes and churches that appeared on all the postcards. A fellow in a flat hat at the helm of a water taxi steered it slowly into the mangroves of Francis Marion Square, telling stories to white folk made whiter by their reflective nanoscreen, which made their whiteness gleam.

“Here to the south side of the square, just beyond the Lindsey Graham Memorial Mangroves, you’ll see the statue of John C. Calhoun,” the guide said, stilling the motor. He gestured to the bronze statue on high, which the King always thought of as the white man in the sky. “Calhoun was one of the state’s most illustrious citizens. He served as a senator and US Vice President in the years leading up to the First Civil War, and he was an prominent advocate of states’ rights.”

King almost laughed as he poled on past, his dark skin bare to the sun. The only reason the white man in the sky had escaped being sunk was because the city fathers had seen fit to raise him up so high. And why? Long ago, any Black folks who happened to pass would do their best to deface him. Rumor had it the statue of John C. Calhoun was missing the pinky finger of its left hand, which sat casually upon the man’s hip, as if he were disciplining a dog.