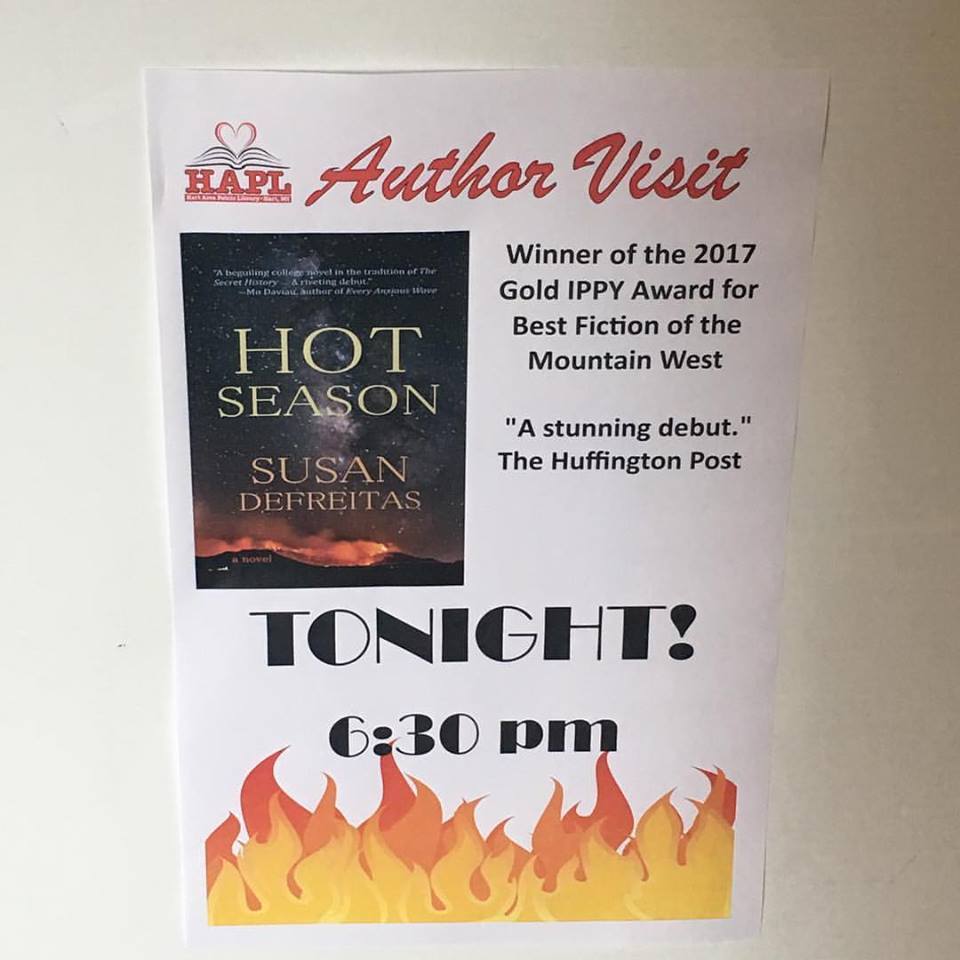 I’m from a small town in rural West Michigan, and this week, I returned to my hometown library a published author.

Though it wasn’t a huge crowd–maybe twenty or so–extra chairs had to be brought out to accommodate those in attendance, among them my old teachers, former neighbors, and high school classmates. The questions were personal and intelligent and heartfelt, full of love for both me and the written word.

Friends, it meant so much to me.

Whenever I remember to take pictures, it’s usually when an event it over. But here’s what I can share–the text of the presentation I gave.

Thanks to Kay and Theresa and Sherry and everyone at the Hart Public Library for having me, and thanks to my mother, Sally DeFreitas, for helping to set up this event. As many of you know, my mother is an author herself, and I’d like to start off by offering a shameless plug for her latest book, a memoir entitled Shipwrecked Three Times—the true story of a Michigan farm girl who went to sea in the Caribbean in the 1960s, and I know I’m biased, but I think it’s a both a really fun adventure and a great read.

Many of you here have known me since I was a kid, and many of you know that I’ve been serious about writing since I was young, and that I’ve been many places since leaving Hart, my hometown. For my senior year of high school, I had the opportunity to attend the Interlochen Arts Academy, where I’ll be reading tomorrow; for college, I went west to Prescott College, and I decided that I liked the little mountain town of Prescott so well that I wound up spending the next fourteen years of my life there. Then, around thirty, I moved up to Portland, Oregon, for my Master’s of Fine Arts in Writing—these days, I split my time between there and Charleston, South Carolina, where my husband is from, and where he has received a two-year contract position.

And although I’ve had a book launch at the Powell’s in Portland, which is the largest independent bookstore in the world, and read at Peregrine Books in Prescott, where my debut novel is set, and where many people recognize very specific things that I’ve written about—I have to say, it’s a particular thrill to read at the Hart Public Library.

All writers start off as voracious readers, and as a kid, the Hart Public Library was my perpetually restocked buffet. Of course, this was the old location, which looked right out over the playground, and the playground and the library in my imaginative geography constituted one thing: a place to dream and play. (This internal geography was further extended for me when I started doing plays at the State Street Gym, which of course once stood where the new library stands today.) And so this section of town still has a sort of shine to it for me, a sort of special allure.

I started off as a reader with middle-grade mysteries (like the Trixie Belden series) but quickly moved on to historical fiction, as well as science fiction and fantasy. Some books from the Hart Public Library that wound up having a big impact on me:

A series of historical novels featuring plucky girl heroines—I remember there was a series of 50, with each novel bearing the title of a different state. Not a bad way to learn some US history!
Madeleine L’Engle’s A WRINKLE IN TIME, which is now being made into a movie featuring Oprah (is anyone else as excited as I am?), as well as MANY WATERS and A SWIFTLY TILTING PLANET.
A fabulous mystery for smart kids called THE WESTING GAME. If you’ve got a puzzle-lover on your hands, I highly recommend it. Same for another book I loved, THE EGYPT GAME.

As I grew older, I read my way through every genre in the Hart Public Library, including mysteries and thrillers, biographies, pop science, historical fiction, fantasy and sci fi, and even horror and romance (thank you, discreet library ladies, for not telling my mother!).

Years later, I’ve found that this is something that sets me apart from my peers, both in terms of authors and editors. Because while those years at Interlochen—and later Prescott College and Pacific University—definitely gave me a taste for the sort of top-shelf fiction that people tend to think of as literary (or even literature), I still love all the genres.

I love the whole world of writing and reading—the way it creates a kind of intimacy between the author and the reader, and the way it really can give you access to another person’s mind (in a way that TV and movies really just can’t).

I love the way reading can open your mind and expand your horizons, especially when you’re from a small town.

That’s why I love libraries—especially small-town libraries, and the Hart Public Library most of all.

I also love this corner of my hometown, which I think is a good reminder in these fraught, politically charged times, of the good that can come when we invest in civic life, in our kids, in education and the arts and in the basic infrastructure that supports families raising kids.

I could go on about that, but I imagine if you’re here, you’re probably interested in this book that I wrote, called HOT SEASON.

I’ll say first that it took me a whole lot longer to get a book published than I thought I would. I won the Young Author’s Award in three different categories when I was a kid, as well as some awards for theater, and I received a scholarship to attend Interlochen; I thought I would have my first novel published before I was 20.

It only took me another 20 years to make good on that goal.

As it turned out, writing a novel was a lot harder than I’d thought it would be, and so was publishing one. In my twenties, I wrote and rewrote the same novel over and over, and eventually I realized that it just wasn’t working. So I went back to school and got my MFA, and during the course of that program, I wrote a collection of linked stories set in a fictional version of that high-desert Arizona town I’d lived in for so long, Prescott. These stories were based on real events involving the struggle to save the Verde River from development, which is a struggle that continues to this day.

My sense was that this book was not the sort of thing that would interest the big houses of the New York publishing industry, so I went directly to the small presses. And I did find a fair amount of interest for the book there—but no one wanted to publish it as linked stories.

So I took the manuscript back to the drawing board and cut it apart, and eventually I decided to rework the first third of that big manuscript as a novel, and that novel is called HOT SEASON.

The novel is a coming-of-age-story set in a town called Crest Top, Arizona, and it follows the fortunes of three roommates—two freshmen and a senior—all of whom are involved in the fight to save the Greene River, and all of whom are seduced by the same young man, who may or may not be an undercover agent.

Set in 2004, it’s a novel that explores the way the US Patriot Act, in the wake of 9/11, really impacted the way the government treats activists, and environmental activists in particular, under antiterrorism laws—when in fact, you know, these people are not terrorists, in any thing approaching the same sense as those who attacked the Twin Towers. These are really just everyday Americans exercising their First Amendment rights and trying to make a difference in the world, in the face of some really horrendous destruction affecting the natural world, which we’re seeing these days, and will be seeing even more of in the days to come, with the future of life on earth on the line.

And while this little small-press book of mine, which launched last November, certainly hasn’t wound up on any bestseller lists, it has racked up some cool accolades. It was a 2016 Staff Pick from Powell’s Books, and The Portland Mercury wrote a review claiming that my book was better than Jonathan Franzen’s latest. Oregon’s state’s largest newspaper named me as “One of 25 Oregon Authors Every Oregonian Must Read,” and the Arizona Daily Sun called it “A brisk read with a potent mix of wit and edge.”

HOT SEASON has also received national recognition: The Huffington Post called it “a stunning debut,”; Read It Forward and BookRiot both recommended it. And in May, HOT SEASON took the 2017 Gold Independent Publisher’s Award for Best Fiction of the Mountain West.

But my favorite review comes from an anonymous Amazon customer, who had this to say:

I loved this book, it is so beautifully crafted. The author’s words weave through the plot and setting with such lyricism, that the story truly casts a spell around the reader. The story is told from the viewpoint of four young women, whose lives intertwine not only through proximity in a small university town in Northern Arizona, but also through similar political and love interests. The plot heats up just like a hot desert day, each degree adding to the risk of wildfire, both in the inner and outer landscapes of these women.

The book leaves the reader pondering some big questions. How far are we willing to go for our beliefs? Can we ever truly know the full impact of our actions? In the face of uncertainty is it better to risk everything or stay on the sidelines? DeFreitas takes us on that journey, showing us characters who struggle to save a river, even as they struggle to find themselves. The very different paths taken by these women all come together in an intensely dramatic climax that leaves the reader reeling, both heartsick and hopeful all at the same time.

Set against a very vivid southwest backdrop, Hot Season is based in part on real events, making the story just that much more compelling. I highly recommend this book, and am giving it five stars.

I’m going to read a bit from the book, then I’ll open it up for questions.