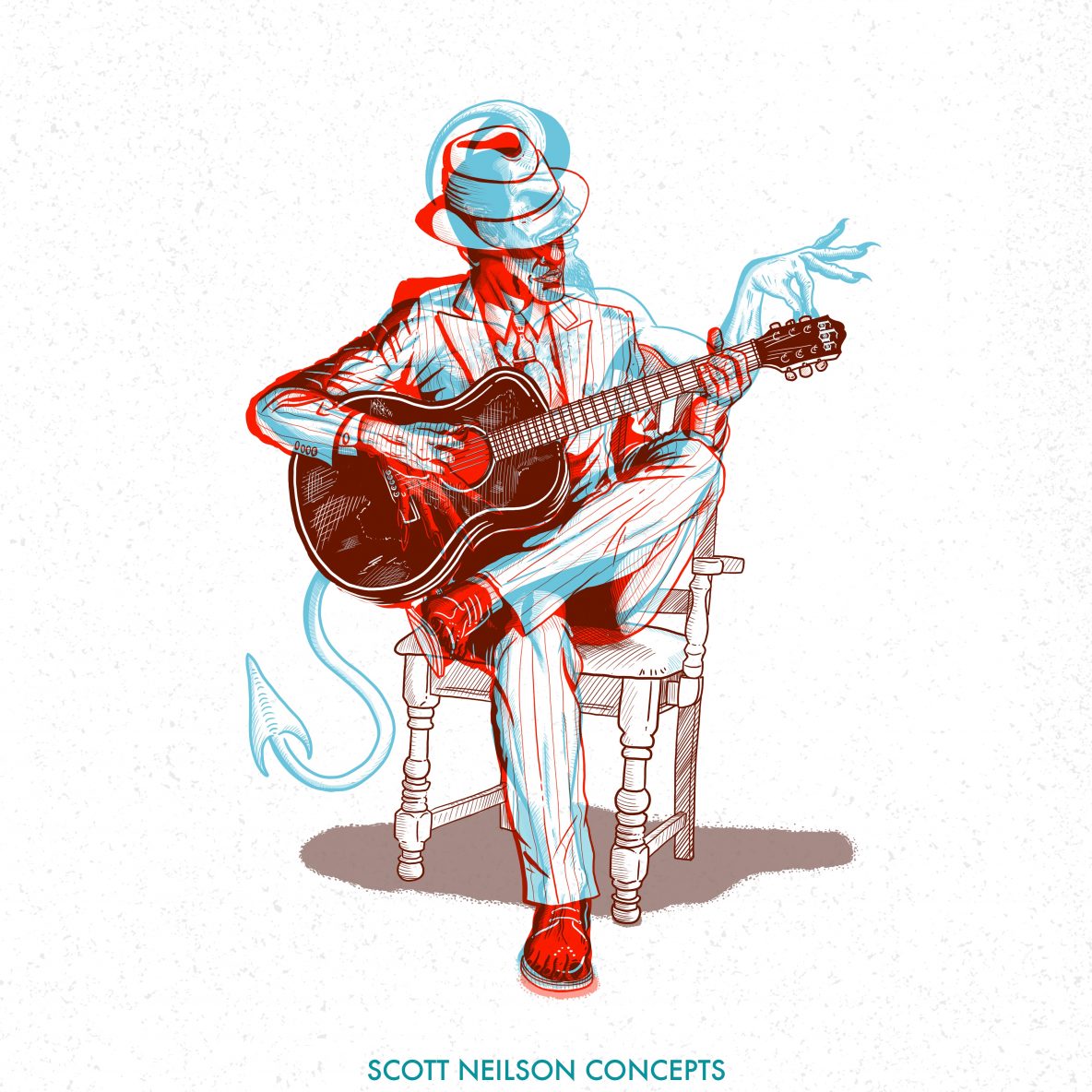 Is a path, presumably, one must stick to.

Or else succumb to the fathomless depths of despair.

Or else agree to a devil’s bargain.

Does the Devil haggle? Robert Johnson would know. He went down the crossroads at midnight and sold his soul so he could play guitar.

Or so the story goes. To hear Son House tell it, Johnson was just a kid who hung around juke joints, begging time with any guitar he could find. The kid could play harmonica, but he sucked at the guitar.

Then he made himself scarce for six months. Where he went, none could say, but he turned up again at a juke joint around Robbinsville, Mississippi, where Son House and Willie Brown were playing, with a guitar of his own over his shoulder. Johnson asked them to give him one more try, and “When he finished,” Son House said, “our mouths were standing open.”

Johnson had a burning desire to play guitar, and clearly, he didn’t have one at home. No one knows what happened when he’d made himself scarce, but this much seems obvious: In order to play guitar, you must have one.

Legend says Johnson made a deal with the Devil in exchange for his talent. And when you hear him sing about Me and the Devil, and that Hellhound on my Trail, it does sound as if they were acquainted.

But personally, I wonder what he had to do—a poor black boy, in Mississippi, in 1927—just to get a guitar of his own.

Virginia Woolf said, “A woman must have money and a room of her own if she is to write fiction.” By that, she meant that in order to write, you must have the time and space to do so. By that she meant, in a Marxist sense, you must own the means of production.

To own your own time, you must either have the privilege of not needing to work or you must be unemployed—which is another way of saying you need money but can’t find a job.

Virginia Woolf was in the former position; Robert Johnson, I suspect, was in the latter, that year he ran away from home and came back with a guitar. Rumor had it, he learned a few things with it from a fellow named Ike Zimmerman; maybe Zimmerman gave him the guitar.

Maybe Zimmerman felt sorry for the kid, the poor devil, who wanted so badly to play.

Maybe, the devil at the crossroads was actually a Marxist angel, a Jew.

The Devil, as they say, is in the details, and the details of a great artist’s beginnings are always obscured by what follows: the immortal songs and stories, the superlative accolades. The King of the Delta Blues recorded just a handful of songs in before he died, but those songs were a matter of obsession for the young white musicians who’d later become Led Zeppelin and the Rolling Stones. As they were for a young Jew named Robert Zimmerman—a distant relation of Ike’s?—who later took the name of an Irish poet. (He also took the lyrics of old blues songs, with little in the way of attribution. Bob Dylan’s attitude toward cultural appropriation may best be described as devil may care.)

In Robert Johnson’s day, the blues was considered the Devil’s music—because God, apparently, didn’t like to see people dance (or perhaps preferred the minuet).

Back then, if you wanted to play the blues, they said, you went to the crossroads at midnight with your guitar. If a big black man appeared and tuned it for you, you’d be given an unholy power: to transform pain and suffering into sex and sensuality. Women would throw themselves at you. Respectable society would shun you. You’d become a ramblin’ man, but always find a soft place to lay your head. You’d die young and live forever.

Were the unborn listening in too? Did they tune in late-night on AM radio, curled up between the dimensions?

I think too of all the artists who failed not because they lacked a burning desire, but because they never found a way to seize the means of production, their own time.

he’s not in the air

he’s not in that book

The Devil wears a suit

he lives in your town

he lives on your street

Really, I’d like to send a Marxist angel to all the black boys out there with a burning desire but no guitar.

I’d like to sic the souls of the dead on all those white devils dressed up in white sheets.

But more than anything, I’d like to set the streets of this country on fire with the Devil’s music, with rock and roll.

Then I’d take the Devil’s fine pin-striped suit (Prada, of course) and lay it gently across the back of a chair. I would turn loose the factory workers whose time he owns, the ones dying because they can’t afford to take time off. I’d liberate that lovely, tight-lipped wife of his, and her lover the doorman too.

I’d turn the skin of that white devil inside out and force him to display the part still capable of sensation. Then I’d take him with me to a juke joint, a club, a house party crowded with the souls of the unborn, hosted by a big black man with a devilish grin known as Legba.

I’d like to see the Devil vibrate like a plucked string at all those young souls, ripe for the picking, and yet find himself unable to do anything but grind his tender hips and weep.

This is a lyric essay written in a form I’ve developed called a Fibonacci spiral, in which each section’s word count is the sum of the counts of the last two (with the title counting as Section 0). Part poem, part essay, part Seduko puzzle, I find this form very freeing.

Want to try it for yourself? Get this month’s prompt by becoming a patron, and support my voice and vision in the world.