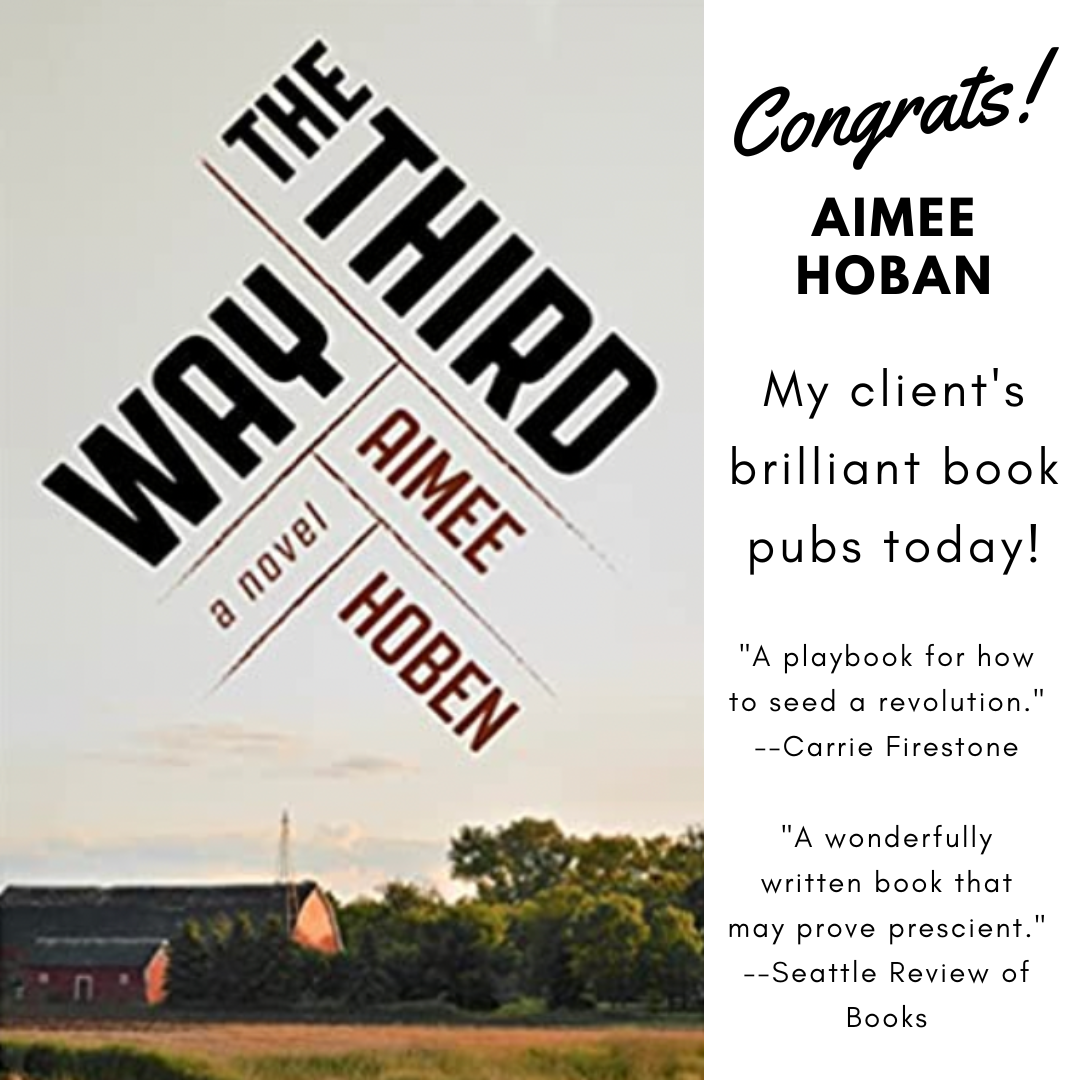 I love all of my clients’ projects (if I didn’t, I wouldn’t take them on) but some are particularly dear to my heart–like Aimee Hoban’s The Third Way, published last week by SheWrites Press.

Aimee had a brilliant idea for a novel, a story about what it would take for Americans to resist the power of corporations. It’s the kind of story I think we desperately need right now.

As Ursula K. Le Guin reminded us, “We live in capitalism. Its power seems inevitable. So did the divine right of kings.” So too the power of corporations.

But Aimee is a lawyer by trade (at the some insurance agency where Wallace Stevens once wrote poems while walking to work), and her first draft was…lawyerly.

I mean that in the best possible way: Aimee’s novel is meticulously researched, and it takes place in South Dakota because South Dakota is a state with a history of anti-corporate sentiment, and an unconventional political landscape. Every detail of the process involved with getting a state initiative passed via referendum there was laid out in the book, as were the big ideas that make this novel such an intriguing thought experiment.

But in her original draft the character development wasn’t quite there–likewise, the emotional stakes and relationship dynamics. So over the course of multiple drafts, we worked together to develop a story that was just as compelling at the level of human psychology, emotions, and relationships as it was at the level of its politics.

The result is my very favorite kind of novel: Thought provoking, emotionally compelling, and inspiring. I’m not the only one who thinks so:

“This is a book that will appeal to any and all who wish that they were heard among the din of the two-party noise machine. A wonderfully written book that may prove prescient.”
—Seattle Book Review, 5-star review

“A playbook for how to seed a revolution, The Third Way is thought-provoking, illuminating, and inspiring. It captivated me from page one and left me thinking meaningful social change is possible. Arden is my favorite kind of protagonist: passionate, determined, and brave enough to take on the ‘C’ word (yes, capitalism).”
—Carrie Firestone, author of The Unlikelies and Dress Coded and community organizer of ForwardCT

“In this impressive first novel, Aimee Hoben provides a clear-eyed, propulsive, and morally complex look at the systems that vie to hold our country a corporate hostage. The Third Way’s Arden Firth is as winning and knowable a character as I’ve encountered in some time. This is such a bold debut.”
—Daniel Torday, author of Boomer1 and The Last Flight of Poxl West

In her note to me in the Acknowledgements section of this novel, Aimee wrote, “without you I’d never have found this book in its current form. With your guidance and creative ideas pulled from the book itself, it became something I am proud of. Thank you for your encouragement and vision, and for your superbly constructive suggestions both large and small. You helped me find meaning and depth in the story that would have otherwise gone untapped.”

And that, friends, is why I do what I do: So brilliant ideas can become deeply affecting novels, and act as story medicine in the world.

Wherever you are with your WIP, I hope this story offers encouragement and inspiration. And I hope it inspires you to pick up a copy of Aimee’s book–it really is so good!